Established in 1996 by Benjamin Leon Jr., Leon Medical Centers is one of the largest and most prestigious primary healthcare organizations in the state. However, what really sets it apart is its rigorously enforced service philosophy of “personal attention at all times” and its commitment to treating its patients with the “dignity, respect, compassion and human kindness that they deserve.”

“March Networks has served us well. Without a high-quality, reliable video surveillance system, we would have a much more difficult time fulfilling our commitment to patient safety and service excellence.” 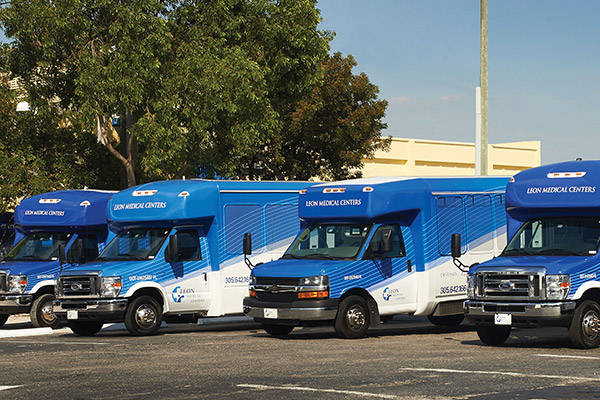 In keeping with its commitment to exceptional service, Leon Medical Centers operates a fleet of 230 buses that pick up patients, take them to their appointments and return them home. To ensure their safety in transit and monitor compliance with its service philosophy, it relies on an integrated March Networks RideSafe video surveillance solution.

“We had another vendor’s equipment up to that point, but the system couldn’t support IP video,” said Erick Martinez, Leon Medical Centers’ Security Systems Manager. “At the time, we were using analog cameras and wanted to upgrade to higher definition video. We were also experiencing a lot of issues with hard drive failures.”

In 2014, Martinez began upgrading to RideSafe GT Series Hybrid NVRs, and now has 120 of the new mobile recorders in addition to almost 200 older 5308 Mobile DVRs.

Each Leon Medical Centers bus is equipped with six March Networks cameras — three high-definition WDR NanoDomes and three analog IR MicroDomes. Five of the cameras are mounted to capture interior views and the last is used externally to capture video of passenger entry and exit points.

“Our focus is on the safety of our passengers,” said Martinez. “Our patients are elderly, so if there’s a slip and fall incident, we want to have evidence of what happened. We also use the system to confirm compliance with our service standards. Our drivers are the first and last points of interaction with our patients, so if there’s an issue, we want to be able to review and rectify it.”

In the event of an incident in transit, the driver is able to push a button on the dashboard to tag the associated video. When the bus arrives at one of the clinics, the tagged video automatically down-loads through a Wi-Fi hotspot to a server for immediate review by Leon Medical Centers risk management personnel. While in range of a Wi-Fi hotspot, the system also downloads health alerts and can also upload any scheduled software updates or new device settings.

For routine video downloads, there’s hardly ever a need for Martinez’s staff to board a bus.

“Wireless downloading saves us a lot of time,” he said. “It makes incident reporting much more efficient when we need to have an issue resolved. It helps a lot.”

The seven Leon Medical Centers are one-stop-shop facilities with onsite labs, pharmacies, diagnostic imaging services and dental clinics. This convenient service model enables patients to see their family doctor or a specialist, have blood work done, get an X-ray and fill prescriptions without having to spend time traveling to multiple locations.

Each center has a café, where patients can have a coffee and socialize. And to help patients stay fit, Leon Medical Centers operates four Healthy Living Centers with modern gyms, exercise and yoga classes, seminars and other programs.

Patients who require surgery or a hospital procedure are picked up and delivered by Leon Medical’s bus transportation service. On arrival, they’re greeted and escorted to their destination by staff from Leon Medical’s Hospital Service Centers, which are located within all of the major Miami-Dade County hospitals.

Aside from the seven centers and four Healthy Living Centers, Leon Medical operates a fleet maintenance garage and a 300,000 square-foot corporate headquarters.

Martinez says that the fixed facilities are also being equipped with March Networks 8000 Series Hybrid NVRs, which are managed using the same Command video management software powering the mobile recorders.

Having a single software solution to access and manage video — regardless of whether it’s recorded on a bus or in one of the medical centers — means that Leon Medical Centers doesn’t have to train staff on multiple software systems. It also provides the organization with complete oversight of its clients and operations.

Once again, it’s all about patient safety and service excellence.

“If a patient loses a purse or a wallet, for example, we’ll be able to find it for them on one of our buses or in a clinic. Or if they have an issue with an employee, we’ll be able to review the video and take care of it,” said Martinez.

“This department didn’t exist four years ago,” he said. “I was part of the IT department responsible for PC support. Mobile security was handled by transportation at the time. I thought it would be a good idea to create a separate department with IT expertise to look after mobile security, and senior management agreed.”

Martinez and his staff are trained to take full advantage of all the Command software functionality. For example, they’re able to manage video viewing privileges to ensure users have access only to those cameras corresponding to their roles or responsibilities.

They’re also able to take advantage of Command’s support for Microsoft Active Directory integration, which collects established user account information from Leon Medical’s corporate network directory. This allows them to select users from the company directory, assign a profile and customize their user interface to display the tools needed for their role.

Looking ahead, Martinez and his team will be busy this year, as Leon Medical Centers continues to expand.

“We have four construction build-outs planned, including a four-story, 80,000 square-foot building and two parking garages — one six-floor and one seven-floor garage — so there will be opportunities for additional fixed video surveillance systems. Because we lease our buses for three years, we’re also always adding to our transportation fleet, so we’ll continue swapping out our 5308 recorders in favor of the newer GT Series.

“March Networks has served us well,” said Martinez. “Without a high-quality, reliable video surveillance system, we would have a much more difficult time fulfilling our commitment to patient safety and service excellence. It’s that simple.”