As one of the fastest-growing c-store chains in America, Yesway knows what it takes to succeed in the convenience store space and how important community partnerships can be to business success.

That’s why the Des Moines-based retailer has, on a number of occasions, shared video surveillance images from its March Networks system with first responders investigating incidents in the communities it serves. The high-quality video has aided law enforcement with their investigations and in turn, allowed Yesway to build strong relationships in many of the cities and towns where its c-stores are located.

“It has resulted in several positive partnerships, portfolio wide,” said Yesway Senior Safety & Asset Protection Manager Brandon Pohlman. “Our law enforcement partners can come to us because they know we have a strong, reliable video surveillance system that is commonly placed in the heart of their community.”

“With Searchlight, we’re able to analyze our POS data and react accordingly.” 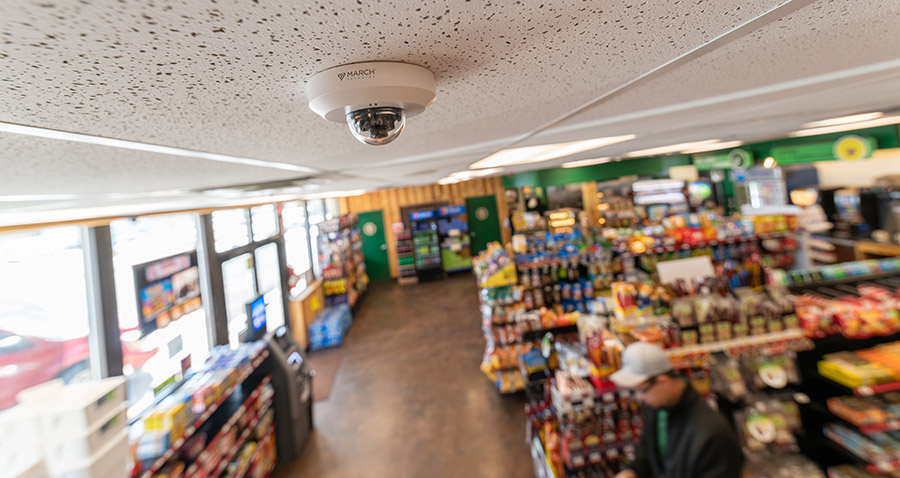 Yesway began its search for a video surveillance provider in 2017. At the time, the company was growing rapidly and needed a solution that could scale to accommodate its future growth.

Brookwood Financial Partners LLC, the private equity real estate investment firm that operates Yesway, has been public about its plans to expand the chain to hundreds of additional stores. In 2018 alone, Yesway added 73 locations to its portfolio. As of mid-2019, it had 150 stores across nine U.S. states including Iowa, Kansas, Oklahoma, Missouri, Texas, Nebraska, New Mexico, South Dakota and Wyoming.

The company’s video surveillance system had to be able to support these sites and more. According to Pohlman, the platform also had to offer centralized video management so video from all its c-stores could be accessed and managed from one location. Also on the wish list was the ability to set user management profiles, so various employees could have different levels of access. Point-of-sale (POS) transaction integration and analytics was another key requirement.

After comparing several video surveillance providers, Yesway determined that March Networks was the best company to meet its needs, Pohlman said. The manufacturer’s ability to combine its video surveillance, POS transaction data and analytics together in one platform with its Searchlight for Retail software is what gave it the edge.

“Most systems out there right now are dual platforms; one platform is just easier to use,” he said.

Yesway currently deploys March Networks Searchlight for Retail in 136 of its c-store locations.

According to Pohlman, it is seeing a reduction in shrink thanks to Searchlight’s ability to rapidly search and sort through POS transactions and match them with corresponding video clips.
“With Searchlight, we’re able to analyze our POS data and react accordingly,” he said. For example, Yesway can group higher-risk transaction types like refunds, and then assign a risk factor to a store based on the number of these transactions.

“In the c-store environment, you don’t have a lot of refunds. So once you have a refund, it automatically gets our attention, and we’ll review it from an integrity standpoint.”

In addition to Searchlight, Yesway is using March Networks’ 8000 Series Hybrid NVRs for reliable surveillance recording. The powerful Linux-based recorders support both analog and IP video channels, an important feature as initially, Yesway had analog cameras. It decided to transition to all IP video in the spring of 2018 with the release of March Networks SE2 Series IP Cameras. The 2-megapixel IP camera line includes models for both indoor and outdoor applications, at a cost-effective price point.

“When the SE2 cameras came out, we made the switch because from a cost standpoint, it just made more sense than analog at the time,” Pohlman said.

Yesway is also deploying Oncam 360° cameras – both 5-megapixel and 12-megapixel models – in all of its stores. The 360° cameras eliminate blind spots and help the c-store see more with just one camera.

The retailer manages the entire system with March Networks Command Enterprise Software, advanced system management software that simplifies multi-site video management. Command allows administrators to customize user permissions and set different views based on each user’s role. This was an important requirement for Yesway as across the company, nearly 200 people access the system.

In addition to Pohlman and his team, Yesway’s operations, human resources, and merchandising teams also use the system. The operations team accesses the platform to monitor and improve customer service, while HR uses it for employee relations and also to recognize employees for good behavior. The merchandising team uses it to remotely monitor merchandise levels and store displays without having to physically travel to a location.

High-quality, IP video images make this kind of remote monitoring possible; they also allow Pohlman and his team to continue to partner with law enforcement officials by providing video evidence that can help with investigations.

Moving forward, Yesway plans to continue to deploy March Networks as it works towards its goal of having 500 c-store locations. Its strong relationship with March Networks has helped it achieve a positive return on its security investment, Pohlman said.

“March Networks has proven to us multiple times that we made the right decision in selecting them as our video surveillance partner.”