Canada’s pedigree as a hockey-crazed nation is on display at two huge arena complexes in the country’s capital, Ottawa.

From early in the morning to late at night, the Bell and Richcraft Sensplexes are beehives of activity hosting children and adults of all ages toting oversized equipment bags, skates and hockey sticks, chasing pucks and some dreaming of one day playing in the National Hockey League (NHL).

The Bell Sensplex in suburban Ottawa is a 180,000-square-foot facility boasting four ice rinks, an indoor soccer pitch and various retail tenants offering food and drink, physiotherapy and skate sharpening services. The Richcraft Sensplex which opened in August 2014 at the opposite end of the city, is a 160,000-square-foot facility with four ice rinks and a similar assortment of ancillary services. Each location attracts approximately one million visitors a year.

Brad Kinnaird is general manager of Capital Sports Management Inc., the company responsible for the design, development, financing and management of the two facilities. From his office in the Bell Sensplex, Kinnaird has a bird’s eye view of activity at both locations thanks to the recent deployment of a March Networks video surveillance system.

“I love the ability to be in two places at the same time… even when I’m at home or at the cottage, I can see what’s happening, get a sense of how busy the buildings are and how well our staff are performing.” 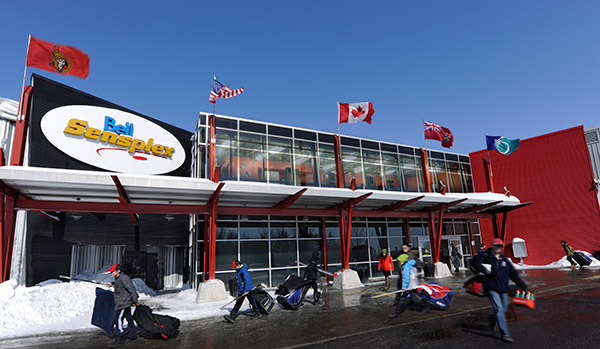 “I love the ability to be in two places at the same time,” said Kinnaird. “I get out to each facility in person, but while I’m in my office at the Bell Sensplex or even when I’m at home or at the cottage, I can see what’s happening, get a sense of how busy the buildings are and how well our staff are performing. If I notice any issues, I can pick up the phone and address them.”

Prior to the installation of the March Networks systems at the two locations, the Bell Sensplex had a very basic store-bought video surveillance system covering the cash registers and dining areas in the restaurant, but it was impossible to view the video over the network.

“You had to be in the food and beverage office, so it wasn’t very convenient, and the quality of the video was poor,” said Kinnaird.

With the imminent opening of the Richcraft Sensplex last summer, Capital Sports Management turned to March Networks for a professional-grade video surveillance system capable of providing enhanced security and management oversight. Ottawa-based March Networks was the favored vendor having already supplied a video management system for the Canadian Tire Centre, the 20,500-seat home of the NHL’s Ottawa Senators.

Special care was taken to select the most appropriate cameras for each location. MegaPX MicroDomes, which are environmentally rated to withstand temperatures of minus 40 degrees Centigrade (or Fahrenheit), were deployed in outdoor locations as well as inside the ice rinks. MDome PTZs are installed at the main entrances to cover the parking lots, and CamPX MicroDomes, ideal for low-light locations, are deployed in the restaurants and bars. MegaPX WDR NanoDomes were selected for the kitchen and office areas because of their small form factor and ease of installation in ceiling tiles, while the MegaPX WDR MiniDome Z — a cost-efficient camera with 1080p resolution — was chosen for hallways and common areas.

“The March Networks system allows us to investigate any thefts or incidents of abuse or violence on or off the ice, but I’m happy to say we haven’t had to use it very much for those purposes,” said Kinnaird.

“There was one incident in December when we had a physical confrontation in one of our bars. We took statements from the individuals involved, reviewed the video and took appropriate corrective action. For the most part, though, the system is used primarily as a management tool,” he said.

On-ice rowdiness and disturbances in the stands by overexcited parents regularly make news headlines in Canada, but at the Bell and Richcraft Sensplexes, a few minutes in the penalty box for a hockey player or a warning by Sensplex staff are usually sufficient to calm things down. In the event of a more serious incident, video evidence would be available for review by league officials or law enforcement.

The Bell Sensplex serves as the official practice facility for the Ottawa Senators when their home arena, the Canadian Tire Centre, is booked for concerts or other events.

“It’s a real thrill for young hockey players when we have one of our many tournaments going on,” said Kinnaird. “They can watch the Senators and other visiting NHL teams practice right in front of them.”

Accessing video from the March Networks system is a snap. Kinnaird simply opens the web browser on his laptop, clicks on the bookmarked Command client and selects a camera.

“As long as I’m connected to the LAN, I can see what’s going on. If I’m at home or anywhere in the world, I connect to the LAN via VPN. If I have to review an incident, I simply choose a camera, key in the date and time and press play. If I need to save a clip, I can download it to a Zip drive. It’s a very easy-to-use system.”

To date, access to video has been restricted to Kinnaird and a few senior managers, but plans are in the works to give other Sensplex staff access to selected cameras using the software’s administrative tools.

Kinnaird still makes the 32-kilometre trek across town to meet with staff at the Richcraft Sensplex and one other smaller arena he oversees, but managing multiple properties is now a lot more convenient thanks to the March Networks video surveillance system.