“The March Networks video surveillance system has exceeded my expectations as well as the expectations of the whole management team,” said Vines.

“Our record ridership of 16.5 million in 2014 is definitely attributable to the emphasis we place on passenger safety and convenience.” 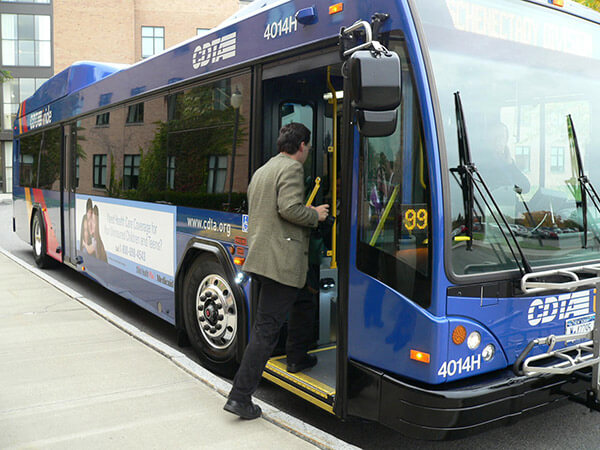 CDTA’s fixed route buses are typically equipped with eight cameras — one on the dash covering the road, two mounted on the exterior covering side views, and five cameras recording events at the fare box, the front and back doors and the interior of the bus. Two microphones per bus also record audio at the driver’s station and at the rear door.

In the event of a reported incident involving a CDTA bus, CDTA’s Risk Management Director and /or Safety and Operations staff use March Networks video management software to retrieve the video clip(s) required to investigate the incident. The process for this starts by indicating the date and time, as well as the bus on which the incident is alleged to have occurred. When the bus returns to one of CDTA’s three garages and is within range of a wireless hot spot, the requested video is automatically downloaded to the server.

The video surveillance system provides evidence for the review of liability claims along with the usual safety and security issues. It’s also effective as a deterrent and is a great training tool, especially for bus operators.

“In the event of a security issue, we’re able to access video to determine exactly what happened,” said Vines. “In one case several years ago, for example, a student fired a pellet gun at one of our buses. No one was hurt, but a window was damaged and had to be replaced. The video enabled us to get a good image of the person, and we were able to identify him and work with the school district to hold him accountable and get restitution.

“The video surveillance system also helped us to identify a passenger who made a continual habit of boarding a bus and refusing to pay. After several failed attempts to get him to comply, we ultimately posted his image internally and suspended him from using our services.”

The mobile video recorders have sufficient internal storage to ensure the availability of video evidence following an incident.

A technologically-progressive organization, CDTA is currently upgrading its video surveillance systems with the addition of IP cameras on its buses and in its facilities. It’s also replacing legacy recorders with new March Networks 8000 Series Hybrid NVRs.

With the transition to the GT Series and 8000 Series NVRs at the facilities, CDTA will be able to manage its entire video surveillance system using the same Command Enterprise software platform and continue the transition to IP video over time as budgets allow.

In keeping with its commitment to leading-edge technology, CDTA has also introduced a mobile app that allows passengers to access real time route information, schedules, service advisories and maps on their smartphones. They can plan their trip and find out when their bus is coming.

“Our record ridership of 16.5 million in 2014 is definitely attributable to the emphasis we place on passenger safety and convenience,” said Vines.

The TSA’s Baseline Assessments for Security Enhancements program ranks a transportation authority’s security plans and systems, training and public outreach efforts, and identifies opportunities for improvement. CDTA was one of only six mass transit agencies in the U.S. to qualify for the Gold Standard rating for 2013.