Located 20 miles east of Minneapolis-St. Paul on the eastern shore of the St. Croix River, Hudson ranks as one of the fastest growing municipalities in Wisconsin. The school district includes eight schools — one high school, one middle school and six elementary schools — and serves approximately 5,500 students.

“We’ve been very pleased with the March Networks solution. I can highly recommend it to anyone needing a video surveillance system.” 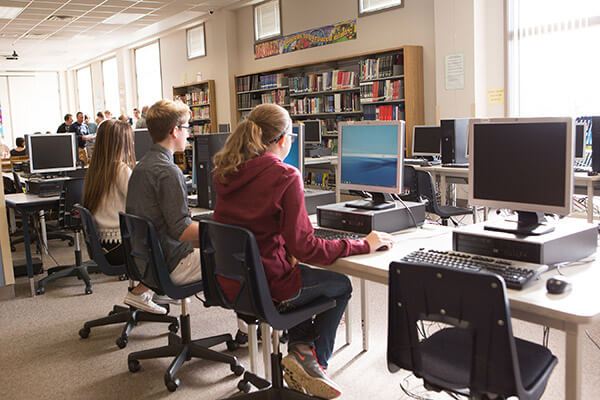 Hudson High was the first school to be equipped with video surveillance, but with no centralized oversight or commitment to uniformity, subsequent acquisitions by the other seven schools over the years left the district with an assortment of video recorders that didn’t talk to each other.

It was far from ideal, said Hudson School District Technology Coordinator Nancy Toll. There was no central management capability and video could only be reviewed at the individual school level.

With tragedies like the December 2012 shooting at Sandy Hook Elementary School fresh in the minds of educators across the country, Hudson School District decided last year to issue a request for proposals for a new video surveillance system.

“We were looking for something that would be easier to manage at a district level — a common, networked system — both for management reasons and end user training,” said Toll. “We also wanted a common, district-wide system that our police department could tap into in the event of an emergency.”

Toll consulted other school districts to craft an RFP and received five responses.

“We narrowed it down to the top two and ended up selecting a March Networks solution,” said Toll. “What made the decision for us was the system’s ease of use and the system integrator proposing it — Marco Inc. — a great vendor partner that we had worked with on previous projects.”

The system is used on a daily basis, particularly in the middle and high schools, said Toll. “Just having the system in place is a great deterrent to mischief, but in the event of an altercation or theft it’s also easy to determine who instigated a fight or walked off with someone else’s backpack.

“We only had the system up and running one day when we were able to capture video of someone following and harassing a staff member outside one of our schools, and that was before we had any training.”

Associate principals and the dean of students are the primary system users, but school secretaries, hall monitors and police liaison officers have also been trained to access and review video.

Overhead monitors in the school offices provide administrative staff with live views from selected cameras, enabling them to buzz in latecomers through the school day.

“One of the things we like about the March Networks system is that we can customize the camera views and display different groups of cameras on the overhead monitors depending on the time of day or what we want to see,” said Toll.

Cameras are located at all entrances and exits, in hallways, cafeterias, school gyms and other areas where students congregate. School grounds, including parking lots and playgrounds, are also covered by cameras mounted around the periphery of the school buildings.

The system is primarily used to resolve incidents of bullying, aggression or theft, but is also there to expedite a police response in the event of an emergency. The Hudson Police Department has access to video from all of the schools through a secure virtual private network and uses the system during mock disasters staged every summer as part of the district safety and security plan.

The cameras are grouped by building and named to correspond with their precise location, so anyone going into the system can easily navigate through a school and select a desired camera view.

Marco installed the system and provided initial training, but a school district technology specialist who works with Toll has responsibility for overseeing the system and trains new users.

Toll’s advice to other school districts planning to acquire or upgrade a video surveillance system is “to start with a plan, know the locations you want to cover and talk to your end users because they’re the ones who have the most experience regarding “hot spots” around the schools.

“We had meetings with all of our administrators to plan camera placements. We walked the buildings and got their input on the views that they wanted to capture. My other advice would be to look for a system that’s scalable and easy to manage both for the end user and at a district level.

“We’ve been very pleased with the March Networks solution,” said Toll. “I can highly recommend it to anyone needing a video surveillance system.”