Scott McCabe has seen tremendous changes in video surveillance technology during the 20 years he has served as network manager at Sauk Rapids-Rice Public Schools in Sauk Rapids, Minnesota.

Years ago, when a camera at a school went out of focus, he’d have to drive to the school, get up on a ladder and physically adjust the lens. Today, with March Networks’ Command Enterprise video management software and IP cameras, he can refocus a lens without getting up from his desk.

Sauk Rapids-Rice Public Schools was an early adopter of video surveillance, but McCabe had an issue with the first system the school district acquired when he discovered that he had to ship a recorder back to the manufacturer every time a hard drive failed.

“One of the things I like about March Networks is their focus on innovation and out-of-the-box thinking.”

“Going without video surveillance in a school for the seven to 10 days it would take to get the recorder back was unacceptable,” said McCabe. “That was the main reason we switched to March Networks 10 years ago. With March Networks, I can replace a hard drive myself while the recorder is installed and have it up and running again in no time.”

Sauk Rapids is located on the east bank of the Mississippi River, 68 miles northwest of Minneapolis. The school district serves approximately 4,000 students in the city and surrounding communities with one high school, one middle school, three elementary schools and one early childhood center. Its most distant school, Rice Elementary, is 14 miles north of the city — another reason why central management of the video surveillance system was so appealing.

The 16-channel hybrid recorders are ideal because they allow Sauk Rapids-Rice Public Schools to continue to use their large installed base of analog cameras and upgrade to IP devices as funds become available.

“The analog cameras get the job done, but they’re not as high-quality as I would like,” said McCabe. “We’ll eventually replace them with IP cameras, but it will take a few years.”

McCabe has put a priority on installing March Networks IP cameras with infrared capability around the periphery of the school buildings to cover parking lots, the high school football field and other play areas. 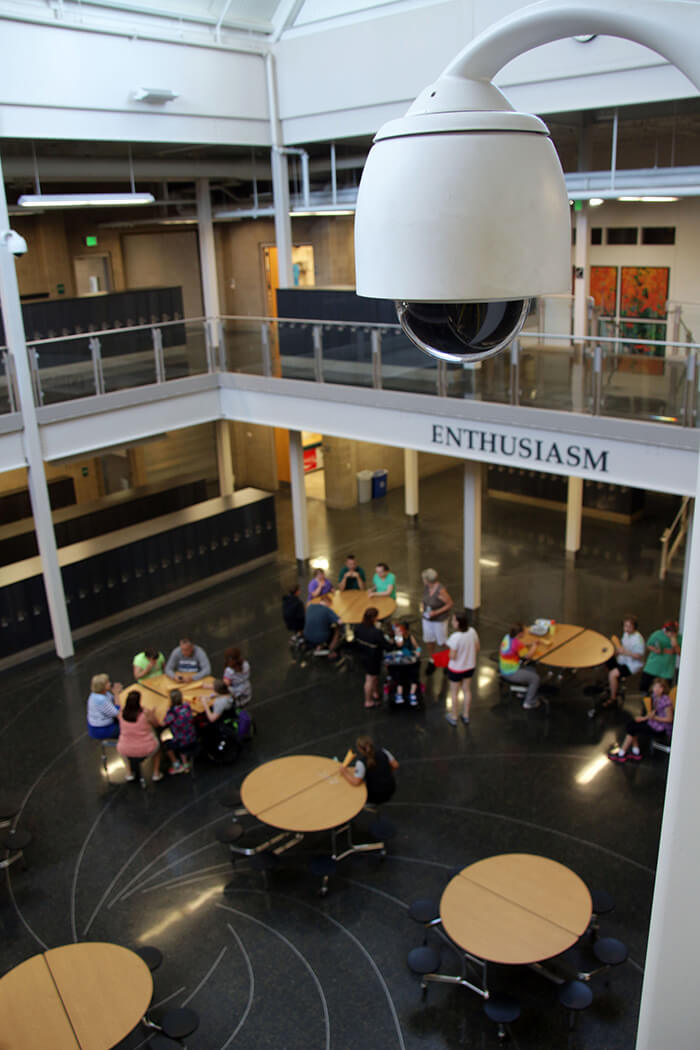 “The IR cameras are very cool,” said McCabe. “You can see a lot better at night.”

Also high on his priority list was the installation of a March Networks MegaPX 360 Indoor Dome to capture an unobstructed 360-degree panorama of the lunchroom in the school district’s middle school.

Unlike the pan-tilt-zoom (PTZ) cameras it replaced, the 360 Indoor Dome captures video from every corner of the lunchroom, eliminating blind spots and reducing the need to deploy multiple cameras.

“The other problem we had was that some of our staff would sometimes take control of a PTZ camera to focus on a table in the lunchroom and then forget to return it to the pre-set tour,” said McCabe. “With the March Networks 360 dome, we don’t have that problem anymore.”

The 5 megapixel 360 Indoor Dome camera features digital PTZ functionality with de-warping in the Command Client software, which allows users to view high-quality video from multiple angles at the same time.

Until a few years ago, McCabe was the primary user of the system. When video evidence was required, everyone turned to him. Now, with the user-friendly Command Client software installed, principals, assistant principals, authorized building maintenance staff, the school district’s liaison officer and even school secretaries are pulling up video from their desktops.

The system helps staff manage the usual risks in a school environment, including vandalism, fights, trip-and-falls, thefts and fender benders in the parking lots.

“It helps a lot with parents when they say, ‘My kid wouldn’t do that.’ We can bring them in and show them the video. We also supply video to our local police and for use in court.”

In the elementary schools, video surveillance also plays an important role in documenting the arrival and departure of children.

“In divorce situations, there’s often a failure to communicate,” said McCabe. “One parent doesn’t know that the other parent is picking up a child. We have cameras on all the doors, so we can go back and pull the video if needed.”

In the event of a more serious incident, officers with the Sauk Rapids Police Department can pinpoint the location of an armed intruder, follow the individual’s progress and safely direct first responders by pulling up video from a workstation in any of the schools, or from the police department itself.

“I haven’t had any problems with my March Networks recorders and cameras. We’ll lose a hard drive occasionally, but that’s not March Networks’ fault. If a hard drive does go bad, the Command software sends me an alert and I just pop another one in.”

If additional support is required, March Networks certified partner Marco Technologies, is just across the river in St. Cloud — less than 10 miles away. “They’ve been our March Networks supplier for years and they do a great job,” said McCabe.

If Marco technicians are called on to service an 8000 Series Hybrid NVR, they can scan a QR code on the front of the recorder with the free March Networks’ GURU Smartphone App to speed troubleshooting, confirm warranty status, execute a Return Material Authorization request, transmit installation audit and security reports, and even watch a tutorial on how to perform a repair.

Together with the unique March Networks docking station architecture that makes it easy to service a recorder while leaving all the cabling in place, the GURU app makes servicing a breeze and reduces the school district’s cost of ownership

“One of the things I like about March Networks is their focus on innovation and out of the box thinking,” said McCabe. “With their 8000 Series Hybrid recorders, their extensive lineup of IP cameras and Command Enterprise software, we’ve come a long way from our earliest adoption of video surveillance.”