School districts across the United States are taking a closer look of their security systems in the aftermath of several school shootings, including the December 14, 2012 tragedy at Sandy Hook Elementary School in Newtown, Connecticut. The Kenosha Unified School District serving 23,000 students in the City of Kenosha, Wisconsin, and nearby communities is a perfect example.

Nestled on the western shores of Lake Michigan 60 miles north of Chicago, Kenosha is a mid-sized city with a population of 100,000.

Prior to 2012, the Kenosha Unified School District (KUSD) was making do with a hodgepodge of video recorders and surveillance cameras in less than half of its 43 school and support buildings.

“March Networks systems are very easy to use and navigate…” 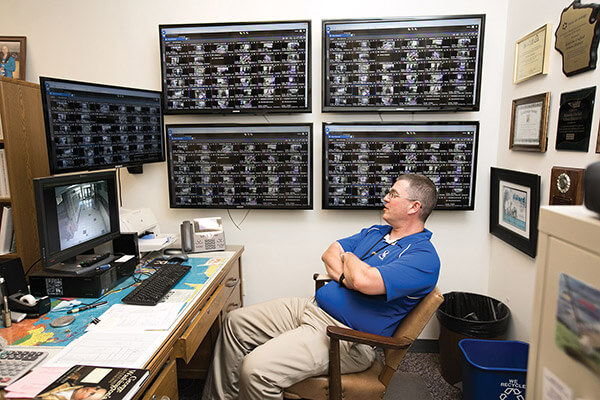 “We had been piecemealing it for years,” observed Maintenance, Environmental and Safety Manager Kevin Christoun. “Each DVR was a standalone unit, so we had to go to the school to review video. We’d get whatever we could afford because there was little budget. When funds were available, someone would go out and by a 16-channel DVR and pick up some inexpensive cameras. We had digital video recorders and cameras in 17 or 18 of our buildings, but they were all different.”

“Often, people didn’t know how to use the systems. A principal or a dean of students would pull video off a DVR and then forget to hit start. Months later, they’d complain that the system wasn’t recording, so we’d go out there and discover that it hadn’t been turned on. That happened all the time.”

With events like the Sandy Hook disaster fresh in their minds, KUSD administrators went to the school board with a proposal to upgrade their video surveillance system.

“We told them we weren’t going fast enough with technology,” said Christoun. “It was really a no-brainer once we sat down and told them this is where we are and this is where we should be. A lot of people weren’t even aware that we didn’t have all of our buildings covered.”

Why March Networks? “Easy”, said Christoun, “Among the mix of recorders we had prior to upgrading the system was a March Networks NVR. It was the one that we liked best and we used it to help guide our requirements for an RFP.”

Easy to use and navigate

Ease of use was a key consideration.

“March Networks systems are very easy to use and navigate,” said Christoun. “It’s pretty much point and click. When you have police officers from three departments, principals and other administrators going into the system from time to time, it has to be intuitive. So ease of use was important. The other thing is that the March Networks system is pretty bullet proof.”

Licensing fees were also an issue.

“We decided we didn’t want to pay for annual licensing fees,” said Christoun. “A lot of the vendors out there say ‘we’re really cheap.’ There’s a reason why they’re cheap. Because depending on how many NVRs you have, you have to pay an annual licensing fee. Now they’ve got you. We didn’t mind paying a little more up front because in the long run, you’re better off.”

“March Networks doesn’t charge an annual licensing fee, which was huge, especially for a school district with a fixed budget.”

Parents love the system, the kids are too busy to pay any attention to it and the police are thrilled with it.

Its biggest effect to date has been as a deterrent.

“Once everyone knew we had a new surveillance system in place, the amount of vandalism dropped dramatically. From the standpoint of deterrence, it’s great.”

Adding immeasurably to the effectiveness of the solution is the fact that law enforcement officers with the three police departments serving the Kenosha area have secure access to all of the cameras on their laptops or tablets through the March Networks Cloud service.

“They can pull up video at the police station or from a cruiser parked in front of a school,” said Christoun.

In the event of an incident in one of the schools, police officers can access the video system to locate an intruder and swiftly intervene to ensure the safety of students and staff, or stop a robbery or property damage after hours.

From his office, Christoun also has the ability to tie into a school’s intercom and phone system to provide students and staff with details about an intruder’s whereabouts and broadcast instructions for safely exiting the building, should that ever be necessary.

One task Christoun and his team had to tackle to help users, including police, was to develop a consistent naming protocol for the cameras.

“All of the cameras are uniformly identified, regardless of the school or building. We realized this would be important right from the beginning because without the consistent naming of cameras, there’s a risk of confusion for users.”

Breaking with the piecemeal approach of the past, Kenosha Unified School District also developed standards for cameras based on their location and the area they are covering.

“In the past, we bought whatever we could afford, so some of them were black and white, some of them were 320p. Now we have a standard across the board for defined applications. It has made a huge difference in the quality of the video.”

Christoun is able to choose from March Networks’ own portfolio of high-definition cameras as well as from hundreds of March Networks-supported, third-party devices. Cameras range from analog devices in elementary school hallways, to 8 megapixel IP cameras in the 20,000 square-foot cafeteria of the district’s largest high school.

“They were awesome,” said Christoun. “The March Networks technical support guys are Johnny-on-the-spot. They were pretty good about getting us an answer or telling us when the next revision is coming out to fix a problem. We also get quarterly visits from the March Networks regional sales manager, and for the first four or five months, we had a tech out here a few times.”

Christoun’s advice to other school districts is “Do your research. Don’t be afraid to ask vendors for trials. If a vendor really wants to sell you their system, they should give you a loaner so you can actually try it out.”

“Also, talk to someone else who has the same system. The biggest thing is not what you’re paying up front, but what you’re paying in two or three years, and who’s going to support it. Because if you don’t have proper support, you have a video surveillance system you can’t use.”