Headquartered in Charlotte, North Carolina, Compass Group North America has the privilege of serving such prestigious clients as Microsoft, IBM, United Technologies Corp., SAP, Louisiana State University, Texas A&M University and the District of Columbia Public Schools. In addition, Compass Group provides catering to special events such as the US Open and the Academy Awards. 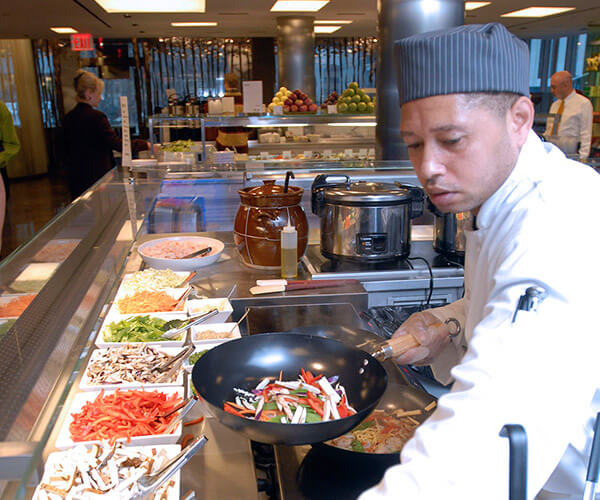 The group’s success in the foodservice business relies on getting a lot of things right —from procurement and logistics to the preparation of nutritious, palate-pleasing food. Dedicated, trustworthy associates and satisfied customers are critical, but so too are loss prevention and an effective means of operational oversight.

Chris McDonald, Senior Vice-President of Loss Prevention, joined the group in April 2012 by which time its loss prevention strategy was “pretty much already in place,” he said. “I was familiar with several different video surveillance systems, but had never dealt with March Networks and wasn’t familiar with its technology. However, it didn’t take me long to become a big fan. We’ve had really good success with it.”

Compass Group has a mix of 8000 Series and 4000 C hybrid networked video recorders and uses both analog and IP cameras to cover cash registers, food storage areas and back doors. Loss prevention staff in Atlanta rely on a third-party exception reporting system to alert them to potentially suspicious point-of-sale (POS) transactions and use the March Networks video surveillance system to view the associated video.

Unusual sales patterns are also cause for concern, prompting loss prevention staff to pay special attention to no-sales, voids and other potentially suspicious POS transactions flagged by the exception reporting system. Using video surveillance to view the actual transactions can provide McDonald’s team with the evidence they need to take action against a dishonest cashier.

Video also allows the loss prevention team to monitor compliance with company policies for cashier accountability. As is the case in most retail environments, cashiers have their own cash drawers or unique log-ins which allow management to identify the cashier responsible for every transaction. Sharing log-ins defeats the purpose, but can be easily detected using video.

The same applies to the company’s policy of always requiring two people present for cash counting during the completion of a shift, but as McDonald has discovered, having two people in the same room isn’t always sufficient.

Video illustrating any lapses helps to improve compliance and is used by Compass Group for training purposes.

Traditionally, Compass Group has used video surveillance almost exclusively as a loss prevention tool, said McDonald. “We’d install cameras over the cash registers, the safe and the freezer door to make sure no one was stealing cash or inventory. There hasn’t been a big focus on using video surveillance for operational oversight, but that’s a direction we’re moving in, especially with our Morrison Healthcare division.

“We’re installing more cameras to provide us with an overview of the retail operation, the food preparation and dining areas and will be doing more video audits. Managers will be able to see, for example, if the salad bar is presentable after 12:30 in the afternoon and if the lettuce bowl is full — things like that, so even if they’re offsite for the day, they’ll be able to check in remotely on their laptops and see how things are going.”

Installing video surveillance systems in its foodservice locations can be complicated given the fact that Compass Group is typically operating under someone else’s roof, explains McDonald.

There is also a wide range of scenarios — from seven day per week, public facing operations in a hospital, for example, to five day per week corporate cafés in restricted access campuses.

“Multiple permissions are invariably required to install video surveillance in one of our foodservice locations,” said McDonald. “We have to consult with HR, security and legal if we’re capturing video of their employees. Then we have to go to IT because we have to pull cable. We try to demonstrate what we expect in terms of ROI and reduced number of incidents. We also sell them on the customer service benefit.”

This year alone, according to McDonald, 30 additional Compass Group sites have been equipped with March Networks video surveillance systems. For these and other more recent deployments, Compass Group is acquiring March Networks 8000 Series Hybrid NVRs, which come in 4-, 8-, 16- and 32-channel configurations and allow for the transition from 100 percent analog to 100 percent IP cameras.

Also underway is a transition from March Networks Visual Intelligence software to the company’s new browser-based Command Enterprise video man­agement system, which can support up to 10,000 video recorders and 128,000 video channels in multisite applications.

“With Command, we don’t need software loaded on each computer terminal, so it’s a lot more convenient,” said McDonald. “We don’t have to get IT involved as much or worry about updating software.”

The March Networks Managed Services team makes sure that the recorders and cameras are operating properly and dispatch system integrators if onsite maintenance is required.

“I don’t have any issues at all with the technical support we have received,” said McDonald. “I’ve never had a question March Networks technicians couldn’t answer or a problem they couldn’t solve.

“We’re very happy with the reliability of our March Networks technology and excited about how it can continue to contribute to our success, not only as a loss prevention tool, but as a means of ensuring the quality food service our customers have come to expect from us.”