Fifth Third Bancorp, one of the top 15 banks in the U.S., is well on its way toward completing a major upgrade of its March Networks video surveillance system. A customer since 2004, Fifth Third has deployed 12,000 March Networks cameras and approximately 1,400 March Networks 8000 Series Hybrid NVRs over a period of 36 months.

“By the end of 2016, we’ll have a total of 1,600 new 8000 Series recorders,” said Mike Neugebauer, Fifth Third’s Vice-President and Director of Corporate Security, who oversees security for 1,300 full-service retail branches, as well as data centers, corporate offices and cash handling facilities across 12 states.

“We constantly get compliments from law enforcement about the quality of our video.” 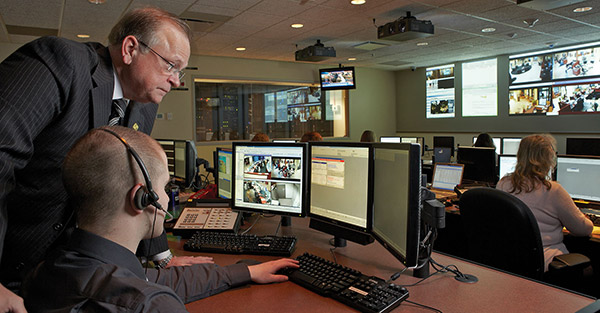 “Bank robberies and break-ins appear to be trending higher nationally,” said Neugebauer. “Much of it is a consequence of the heroin epidemic. Typically, they’ll go through a window in the middle of the night to see what there is to steal.

“We constantly get compliments from law enforcement about the quality of our video. Even if the bad guys show up with hoodies or masks, we can zoom in on clothing patterns and brand logos, partial facial features, tattoos or other distinguishing marks.

“Security staff in our 24-hour monitoring center can verify an alarm and tell responding law enforcement officers what we see,” said Neugebauer. “Video verification is huge. It changes law enforcement’s urgency to respond.”

In minutes, Fifth Third security staff can email crystal clear images of a suspect to police, dramatically improving the chances of apprehension.

Mix of analog and IP

The 8000 Series Hybrid recorder is a perfect fit for Fifth Third, accommodating a mix of analog and IP cameras and offering up to 16 TB of onboard storage across four hard drive slots.

“Typically, we’ll have two IP MiniDomes and 14 analog cameras per branch, but we’re starting to use more exterior-mounted IP cameras in our elevated risk branches, so storage is important to us,” said Neugebauer. “The other thing we like about the 8000 Series is how it gives us sharper images from our analog cameras.”

The availability of the 8000 Series Hybrid NVR in 4, 8, 16 and 32-channel configurations is also a plus because it allows Fifth Third to acquire a fit-for-purpose unit for every application.

The decision to standardize on March Networks cameras frees Fifth Third from having to worry about any compatibility issues. “When we weren’t buying March Networks cameras, it made management of the cameras a lot harder for us,” said Neugebauer. “That was especially the case for IP megapixel cameras and managing the software patches that have to go on them. The fact that our March Networks cameras work in concert with our NVRs means we don’t have to do any software loads like we had to do when we were buying another camera brand. We were managing many pieces of software instead of just one platform.”

Transitioning to Command Enterprise and Searchlight

Next on the agenda for Fifth Third is a transition to March Networks Command Enterprise video management software and the acquisition of March Networks’ Searchlight for Banking software.

Command Enterprise features a user-friendly, browser-based interface that provides support for up to 10,000 recorders and 128,000 video channels, while Searchlight for Banking is a suite of tools to speed fraud investigations and capture business intelligence such as tracking customer behavior.

Linking video with teller and ATM transaction data, for example, allows fraud investigators to quickly establish the identity of an individual associated with a transaction.

“On the retail side, we also hope to take advantage of Searchlight to help us make better business decisions,” said Neugebauer.

Using Searchlight’s queue length monitoring analytics, Fifth Third will be able to gather and compare metrics on branch traffic and speed of service. It can also be used to track self-serve kiosk usage and gather data on how long customers linger in front of marketing displays.

“We’ve just done some testing and we’re very pleased with it,” said Neugebauer.

While security remains the primary application for video surveillance at Fifth Third, other “lines of business” are taking advantage of it.

“In the past, security directors were always hesitant to share their video surveillance system, but we share our system with our facilities and retail groups, said Neugebauer.

“Our facilities group has really embraced it. We’ll put cameras in mechanical rooms, for example, so they can see the indicator light configurations on the control panels. It often saves them from making a trip to the site. If a technician gets an alarm from an HVAC system or a generator, for example, he can diagnose the problem remotely and take the necessary steps to resolve it.

“Retail uses the system to look at compliance with opening and closing procedures. Or, they may have a teller who’s great at selling and go in to look at best practices for training purposes.”

Fifth Third began retiring the 4000 C Series recorders it acquired in 2004 two years ago and will only complete the transition to new 8000 Series units in 2016.

“Some of my peers in the industry are buying new recorders every three years,” said Neugebauer. “Everything has a lifecycle and we feel the lifecycle for March Networks products is significantly longer than most of the other systems out there.”