Hamilton Health Sciences, a March Networks customer since 2004, is the second largest healthcare organization in Ontario with seven hospitals and 11,000 employees serving 2.3 million residents in Hamilton and the surrounding area.

Keeping patients, staff and visitors safe, and protecting the organization’s physical assets in so many locations is a demanding job, but a monitoring center with a video wall and March Networks DecodeStation VX software has been a game changer.

For years, security officers in each hospital or clinic monitored video locally on desktop computers. Now, video is monitored centrally in a purpose-built facility with three, 60-inch overhead monitors, a smartboard and four workstations for conducting investigations. 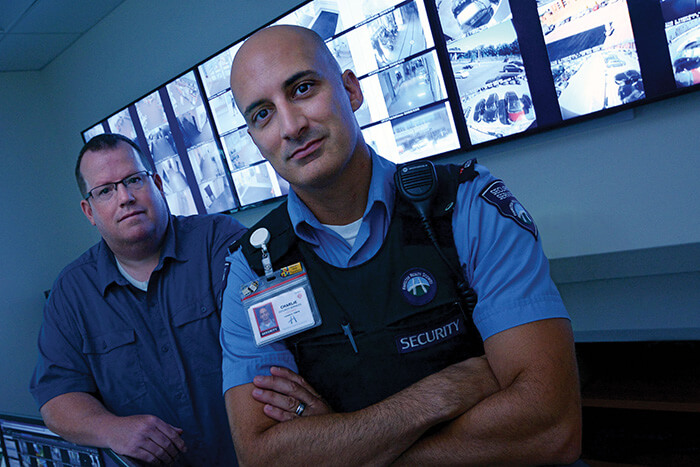 Housed in the brand new Ron Joyce Children’s Healthcare Centre, the monitoring center operates 24/7 with video feeds from surveillance cameras in a dozen or more locations across the healthcare organization’s footprint.

“Security staff in their individual locations still have access to local video, but the central monitoring facility serves as the security department’s nerve center and gives us an extra set of eyes that we didn’t have before,” said security manager Derek Bailey.

“If there’s an issue with someone acting out or posing a threat to staff, the call goes to the central monitoring facility. They’ll dispatch officers on site and use live camera views to give them a heads up about what to expect. If the person causing a disturbance leaves the scene prior to the arrival of security, we can track them throughout the facility with our March Networks system and relay that information to our officers.”

Hybrid capability a ‘big plus’

“The hybrid capability of the March Networks NVRs is a big plus,” said Bailey, “because they allow us to use both analog and IP cameras. We’d like to upgrade to an all-IP system today, but budgets are tight in healthcare, so it’s important for us to be able to transition to IP over time.”

Hamilton Health Sciences almost ended up with a different video surveillance system at the new Ron Joyce Children’s Healthcare Centre when consulting engineers specified a competitor’s product, but Bailey and co-manager Darren Hayes were able to make a business case in favor of enterprise-wide uniformity with March Networks.

“We’ve always liked the fact that the March Networks system is backward compatible and very user friendly,” said Bailey. “There isn’t a huge learning curve for someone who is new to the system or someone who isn’t particularly computer savvy. You can sit down in front of a March Networks system and pick it up very quickly. The graphical user interface is straightforward.

“I also like how we were able to migrate from the older Visual Intelligence video management system to Command Enterprise, with live monitoring, evidence manager and investigator functionality all accessible on one screen.”

The March Networks Command software provides Bailey with extensive user management capabilities as well, allowing him to administer user credentials and audit what people are doing on the system.

“We’re a big department with 80 security staff and other users at different levels throughout the organization, so it’s important for us to manage the number of cameras people are able to access.

“For example, we have a volunteer association that runs all of our cafeterias,” said Bailey. “We give them access to certain cameras in their area for process monitoring. They can see how busy they are and adjust staffing levels if necessary. The system allows us to limit their access to live video only.”

The system helps the healthcare organization manage the usual risks, including slip and falls, abandoned bags, threats to staff and thefts.

For example, shortly after the installation of the new video surveillance system at the Ron Joyce Children’s Healthcare Centre, a Nintendo gaming system disappeared.

“We reviewed our recorded video and were able to see a member of the cleaning staff walking out with the item,” said Bailey. “We brought the employee in for questioning and told him we knew he did it. He denied it at first, but confessed when we showed him the video. He told us he took the gaming system to a pawn shop, so we persuaded him to buy it back and return it, then terminated his employment.”

“We use them as our first tier support for all of our cameras and NVRs,” said Bailey. “They’re very responsive and great to deal with. We also contact March Networks tech support from time to time. They’re a great bunch of people. I have nothing but great things to say about the level of service we get.”