Retailers around the world are starting to embrace the idea that their video surveillance systems can help them do a lot more than catch shoplifters and dishonest employees.

Rent-A-Center, a Plano, Texas-based retailer with over 4,000 stores and kiosks in 50 states, Mexico and Canada, is one of them.

A leader in the rent-to-own business, Rent-A-Center (RAC) offers name-brand furniture, electronics, appliances and computers to consumers through flexible rental purchase agreements that allow customers to obtain ownership of the merchandise at the conclusion of an agreed upon rental period.

“March Networks Operations Audit brings awareness to something that impacts directly on sales and motivates the store managers to get it right.”

The company has had video surveillance in its stores for many years, but it was a basic, security-focused system.

“In 2015, the RAC Physical Security team took a step back and began looking at how we could add value beyond using video surveillance for asset protection,” said Brian Peacock, the company’s Director, Asset Protection, U.S. Operations. “We started looking for business analytics, data integration and better quality video to create an enterprise solution. After nine months assessing a variety of different video platforms, the team discovered March Networks and really liked what it had to offer. After several demos and a couple of very positive references, we made the decision to move forward.” 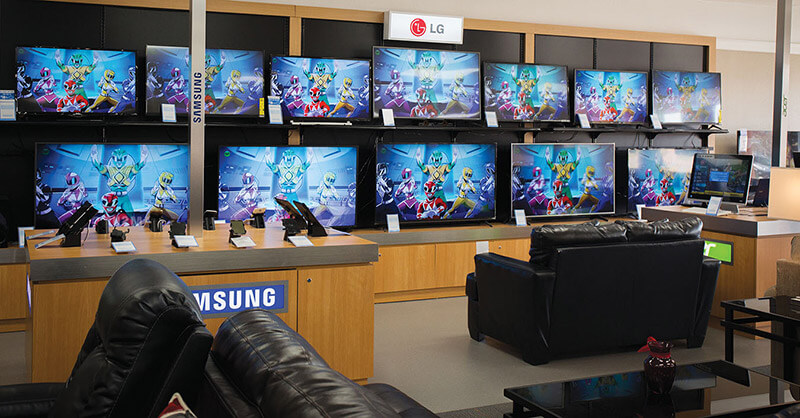 In addition to cutting losses from theft, the March Networks business intelligence software applications alert operations management to merchandising and promotional deficiencies that impact directly on sales and profitability.

Managing thousands of stores from Maine to California is not an easy task, noted Peacock. “We have 330 district managers across the country, each responsible for a dozen stores which can be spread out over miles of geography, so we use the March Networks Operations Audit to capture a high resolution image from each store every morning. That report can be automatically distributed once-per-week to the district managers so they can quickly see their stores and assess how each looks at opening. Based on the report and images, managers can pick up the phone and have a discussion if there’s an issue with the store image, merchandising or if promotional signage hasn’t been properly executed.”

“We’re just testing it with a few stores to get it right,” said Peacock. “We may narrow it down to images from four cameras and will have to decide on the frequency of the reports.”

Rolling out March Networks across the chain

Rent-A-Center began rolling out March Networks 8000 Series Hybrid NVRs and IP cameras in early 2016. By mid-February 2017, it had 104 stores up and running and is currently on a pace to do five new installations per week.

“It’s our intention to roll out March Networks systems across our entire chain,” said Peacock. “We’re slowly moving in that direction, but we want to make sure we’re doing it right — not just quickly.”

Working alongside Rent-A-Center’s operations management to make even more use of the Searchlight capabilities, Peacock and his team also came up with what they call a Store Appearance Virtual Validation Report.

“Every Friday, we use the March Networks video platform  to take a look at the AV Wall, smartphone, tablet and computer displays from each store and score them for compliance with our merchandising standards,” explained Peacock. “We’re basically looking for stockouts – instances where an item on display has been rented and hasn’t been replaced. If a product isn’t on display, we’re less likely to rent it.

“We send the reports to our Regional Directors, District Managers and Store Managers with four photos of each location,” continued Peacock. “The March Networks Operations Audit brings awareness to something that impacts directly on sales and motivates the store managers to get it right. A 30 percent improvement at this point in our rollout (104 stores) equates to 610 pieces of additional products on the showroom floor. We’re really excited about that.”

Searchlight for Retail also provides a Security Audit – detailed reports of user-defined events such as safe and cash drawer openings, security cabinet activity and back door traffic, allowing Asset Protection staff to click on a link and view the corresponding video.

Point-of-sale integration with video, another capability of Searchlight for Retail that Rent-A-Center hopes to deploy, will allow Asset Protection staff to view reports of high-risk transactions such as customer- not-present refunds, and immediately link to corresponding video.

Each store is equipped with one March Networks 8000 Series Hybrid NVR and an average of seven cameras, including two March Networks MegaPX Indoor Analytic Domes. On the showroom floor, Rent-A-Center is using a combination of March Networks MiniDome Zs and ME4 IR MicDomes — the latter featuring four-megapixel resolution, high dynamic range, integrated infrared capability and a built-in microphone.

The hybrid capability of the 8000 Series recorders also accommodates analog cameras in the manager’s office and at the back door, where high-definition video isn’t required.

Rent-A-Center began equipping its 8000 Series recorders with 4 TB of internal storage, but has since upgraded to 6 TB to meet its video retention target of 90 days.

The system is powered by March Networks Command Enterprise video management software, which can scale to handle thousands of video recorders and as many as 128,000 video channels – more than enough to manage Rent-A-Center’s extensive footprint.

Rent-A-Center relies on Security Source Inc., a security systems integrator and March Networks certified solution partner with 5,000 technicians across the country, to install and monitor the performance of the system.

“They log on every morning and go through all the system health alerts in Command’s administrative console to make sure the system is operating at peak performance,” said Peacock. “We have a good partnership with them. We’re not shy about pushing the envelope, and they’ve been very patient with us. We’re a very innovative group, and we’re always looking for the cutting edge, which Security Source has been able to help support.”

“We got it down to three finalists and chose March Networks because of its advanced technology and commitment to exceptional customer service,” said Peacock. “When you go into a relationship like this, you have to have faith that it’s going to be a long-term partnership. We were confident that would be the case with March Networks.”