Managing security along public transit routes comes with many challenges, particularly as more people rely on buses and trains for daily transportation.  With so many commuters, and multiple vehicles moving around the clock, the risk factor for accidents, altercations and other issues remains high.

Advanced real-time video surveillance monitoring is a critical part of protecting the public. When an incident occurs on a vehicle, you can immediately see what’s happening, and also share that video with police or other emergency personnel.

But like most transportation agencies, you probably don’t have an unlimited budget to live stream high resolution megapixel images to your command center. Streaming 1080p video over a 4G LTE network can be costly, especially when multiplied over hundreds of buses or trains, each with multiple surveillance cameras.

So how do you maintain regular live access to your mobile cameras without incurring a massive expense?  Here’s some advice on managing your mobile bandwidth consumption.

One of the biggest ways to reduce your bandwidth is to pre-program your IP cameras based on activity level. This takes a bit of time, but it’s well worth the effort. There’s no sense capturing 1080p images inside an empty bus, so do a thorough review of your surveillance needs. When do you absolutely need 720p or 1080p images? And when will a 2CIF or 4CIF image suffice? Remember that what you’re capturing affects your bit rate, so consider the complexity of your scenes. You can maximize your bandwidth by programming your IP cameras to record at the right bit rates for your vehicles’ activity levels.

Let’s take a closer look at how to do this:

During low activity times (when few riders are on board a vehicle or the vehicle is at the depot) you’re capturing mainly static scenes. In this scenario, capturing a 2CIF resolution image at 15 frames per second (fps) would result in a camera bit rate of 0.11 Megabits per second (Mbps). 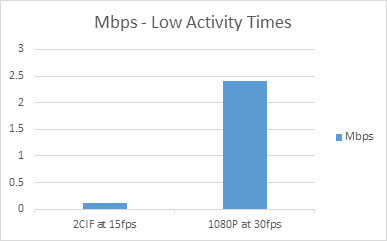 Capturing this same scene in 1080p, at 30fps, would result in a camera bit rate of approximately 2.4 Mbps, more than 20 times the bandwidth of the 2CIF image.

So you can see how a little adjustment at the right time goes a long way toward reducing your overall bandwidth consumption.

During medium activity level times (in between peak hours, when your vehicles are making frequent stops and passengers are getting on and off the vehicle) your cameras are consuming more bandwidth. 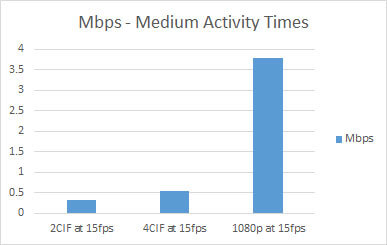 During your highest activity times (defined as having lots of passengers onboard and lots of motion) you’re going to consume the most bandwidth because you’re capturing complex scenes. 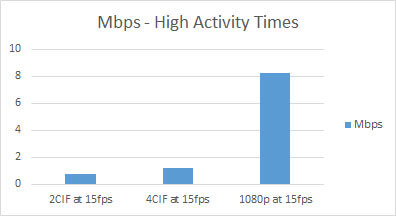 The key here is to find the best balance between image quality and bandwidth consumed. You don’t want to incur bandwidth costs for viewing high-res images of empty buses, but you also don’t want grainy, pixelated images when you’re trying to decipher important details.

I suggest testing out a few different resolutions and frame rates at different times throughout the day to find the right balance.

Remember, the numbers cited above are examples, and factors like the position of your cameras, the lighting inside your vehicles and the type of scenes captured all play a part in bandwidth consumption.

Now that you know the right bit rates to use throughout the day, you may be asking yourself: “What if an incident occurs on a vehicle at a time when I’ve programmed my cameras to capture only 2CIF images?”

The answer, of course, is to use alternate stream recording. Use the low resolution stream for live viewing, and then record a higher resolution stream to your network video recorder (NVR). This gives your command center the ability to see into buses or trains as needed (using much less bandwidth) and still ensures you’re capturing high quality, evidentiary video that you can pull later for forensic analysis should an incident occur.

Want to learn more about setting up your IP cameras? Read this blog, or leave us a question below.