Bankomat AB, a Swedish company co-owned by five of the country’s major banks, is in the midst of a large-scale rollout of March Networks video surveillance systems.

Ownership of some 2,200 ATMs throughout Sweden was transferred to Bankomat in 2010 as a result of a landmark agreement by five financial institutions: Danske Bank, Handelsbanken, Nordea, SEB and Swedbank.

“March Networks is a preferred vendor in the banking market because of the functionality of its systems, their ease of use and reliability.” — Anders Gustafsson, Stanley Security

Additional efficiencies have been achieved by contracting out the management of Bankomat’s video surveillance systems to Stanley Security and its security operations center in Stockholm.

Bankomat currently has 140 ATMs equipped with March Networks hybrid network video recorders (NVRs), including new 8704 Hybrid NVRs, and has plans to roll out another 200 recorders this year.

The 8704 Hybrid NVR was designed for space-constrained locations and is easily installed within an ATM.

It features an internal backup battery guarantying a systematic shutdown in the event of a power failure, a variety of security features and up to 2 TB of onboard storage.

Acquiring 2,200 ATMs from five banks wasn’t without its challenges. Many of the ATMs didn’t have any video surveillance and those that did came with a variety of different vendor platforms, including a number of March Networks systems. 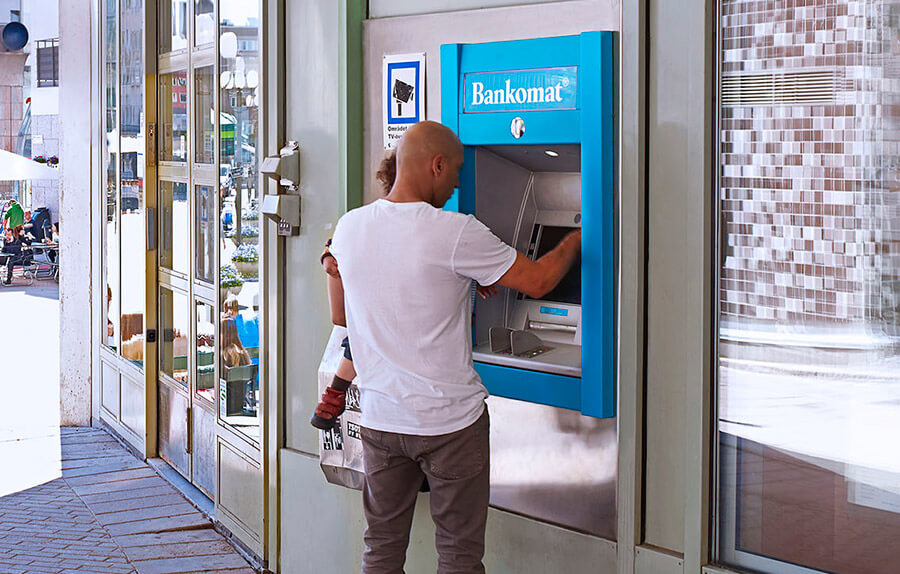 The decision to standardize on March Networks made sense, said Gustafsson.

“March Networks is a preferred vendor in the banking market because of the functionality of its systems, their ease of use and reliability. It’s not often that we have to replace a March Networks recorder.”

The ATMs are equipped with between two and four cameras. Many of the sites have older analog cameras, but a transition to IP technology is in the works, said Svahn.

“IP cameras give us much better quality,” he said. “Everything is moving to IP, so there’s no reason I see to work with analog equipment.”

March Networks has its own line of IP cameras, and also ensures that its video management software and recorders integrate with hundreds of third-party edge devices.

Bankomat relies on Stanley Security to retrieve video. Customers questioning a transaction on their statement first contact their own bank.

“The bank, in turn, contacts us and, if we have a video surveillance system installed at the ATM where the transaction was made, we give Stanley the date and time, and they send us the video clip,” said Svahn.

ATM fraud still occurs, but is much less of a problem than years ago, he said.

“What we see more of now are cash traps — metal plates that are installed over the cash dispensers that prevent customers from seeing or collecting their money. When the customer leaves the ATM, the crooks remove the plate and collect the cash.”

Stanley uses March Networks’ Enterprise Service Manager (ESM) software for centralized control of all recorder programming. The ESM manages user permissions and recorder configurations. It also monitors network performance and the health status of recorders, hard drives and cameras, allowing for the prompt dispatch of technicians in the event of a system failure.

Once on the scene, Stanley technicians can use their smartphone to scan the QR code on the 8704 recorder’s front panel to troubleshoot any issues, pull up the recorder’s warranty status and access instructional videos to help them perform any necessary service.

Integration with the March Networks system allows Stanley security guards to pull up video at a location to keep an eye on the scene and alert law enforcement in the event of a holdup or unauthorized access.

“Being able to remotely manage access control and the health status of the video surveillance systems appealed to Bankomat and helped us win the business,” said Gustafsson. “It’s much more efficient than dispatching staff, saves time and improves security.”