It’s a fact of modern-day life that bank customers rely on ATMs for 24/7 access to their cash, even when branches are closed. But these machines can be easy targets for thieves, since they’re commonly unstaffed and often exposed. News outlets report that ATM crimes and incidents of fraud have doubled in the last year.

Some of these crimes include ATMs being damaged by explosives, as was the case in the United Kingdom this past summer. Suspects used an explosive device to break into an ATM located on the exterior of a convenience store in Bispham, Lancashire. Both the ATM and the store were damaged, and an unknown amount of money was taken. Thankfully, no one was hurt; however, oftentimes in these cases suspects aren’t apprehended and ATMs are damaged beyond repair.

With ATM crimes on the rise, it’s more important than ever that banks improve their security. Video surveillance can help. 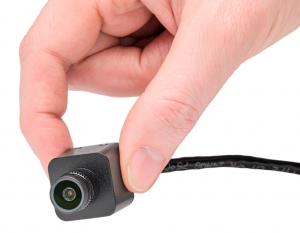 While it would be impossible for banks to eliminate incidents of crime, fraud or vandalism altogether, clear footage from a security camera designed specifically for ATMs can help solve these occurrences. As many ATMs are located outdoors, cameras need to be designed to capture high-quality video in challenging lighting conditions.

A camera with digital overlap high-dynamic range (DOL-HDR) helps address this problem. DOL-HDR blends the best parts of three separate exposures in every frame to deliver the sharpest, most colorful and well-lit images.

With a discreet DOL-HDR camera purpose-built for ATMs, such as March Networks’ SE2 ATM Camera, the video adapts to extreme lighting conditions to ensure crystal-clear images. This is critical in a setting where a customer’s face could be backlit by sunlight or reflective glares from buildings in the background.

Another aspect to capturing high-quality images is selecting an ATM camera that fits properly into the unique environment of a bank machine. A compact covert camera that delivers sharp megapixel images at close range from inside the ATM is optimal. Look for features such as mounting brackets specifically designed for your ATM model to help prevent the camera from shifting over time. Some providers even offer custom-made mounting bracket designed for your specific application.

Alerts you to suspicious activity

Integrating your security cameras and network video recorders with intelligent application software, such as March Networks’ Searchlight for Banking, can help with crime investigation. Further integration with a tool that delivers real-time notifications, such as March Networks’ Alert Communication Tool (ACT), can help detect and quickly alert you to suspicious activity.

For example, with a system that integrates surveillance video with ATM transaction data and analytics, it’s possible to receive alerts about suspicious transactions at banking machines. The system can quickly sort through transactions to find irregular activity, such as the same person making multiple transactions using different cards (a possible sign of fraud), or someone loitering around the ATM without making a transaction. With automated alerts, you can quickly send security personnel to the location to investigate.

ATMs protected with video surveillance instill a sense of safety in customers.

Customers know that using ATMs located in certain areas or at particular times can be risky, even if they follow basic safety measures. Knowing that a branch’s ATMs have surveillance cameras installed in them can provide customers with a sense of security.

Similarly, if an ATM is vandalized or in poor condition, a customer is more likely to avoid using it. Protected ATMs can instill a sense of confidence in customers and ultimately lead them to continue using that branch.

Safety isn’t the only element that plays into customer loyalty – a bank’s reputation does, as well. The media attention around ATM crime, fraud or vandalism can decrease customer confidence, which can motivate him or her to seek alternative options. Installing a security camera such as the SE2 ATM Camera that is purpose-built for bank machines can help deter such incidents, thereby fostering customer loyalty.

To learn more about an ATM video surveillance solution for your branch, contact us.

Read “Boost Your Bank’s Anti-Money Laundering (AML) Efforts with Video-Based Business Intelligence Software”
Sign up for our newsletter here Get the latest news and information on our IP video products with March Networks News. Subscribe now