Most retailers invest in a video surveillance solution to improve security. Many also use it as an investigation tool to help resolve customer disputes, liability claims and reduce losses from theft and fraud.

Complete Releaf relies on its intelligent video solution from March Networks for all of those reasons, however compliance with state regulations was the primary objective when CEO and owner Eric Ryant started looking for a video system for his new, 3,000 square foot cannabis dispensary in Lafayette, Colorado.

Unlike many other types of retail environments, cannabis dispensaries must comply with strict rules governing the type of video surveillance equipment used, where cameras and equipment are placed, and how long video evidence must be retained.

“Having video surveillance in our dispensary definitely deters theft. Combining the video with transaction data goes a step further and really causes people to think twice before they do something they’ll probably regret.”

‘Everything I was looking for’

Already familiar with the regulations based on his experience operating a second dispensary and a cultivation center in Lafayette, Colorado, Ryant sourced multiple bids for his new video solution.

“Once all the bids were in, I went through the process of analyzing each one and ended up narrowing the contenders down to two,” said Ryant. “In the end, I selected the March Networks proposal from Falcon Networks. The solution had everything I was looking for, including POS integration, and additional capabilities I thought might be useful down the road. It met all of the compliance criteria, and the price was comparable.” 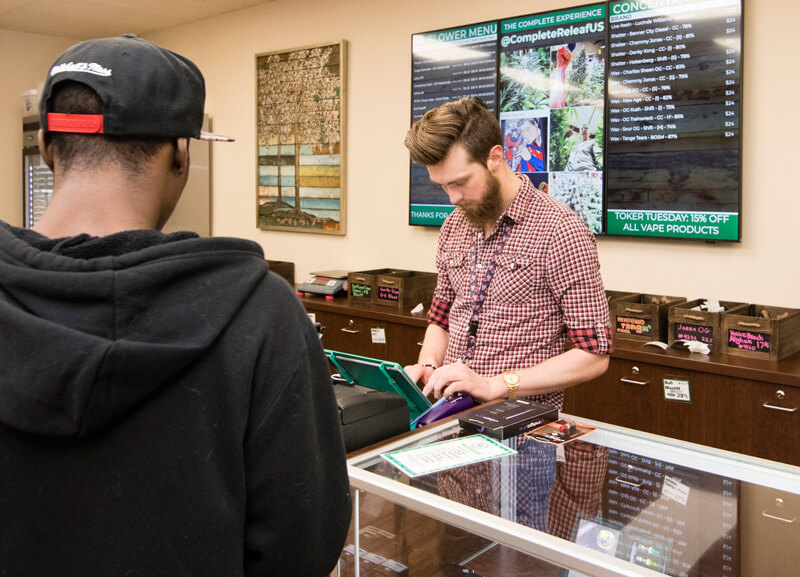 Prior to opening the boutique dispensary in January 2018, Ryant worked with Falcon Networks, an experienced system integrator and a March Networks certified partner with offices in Colorado and South Carolina, to design and install a fully-compliant video solution.

Today, March Networks ME4 Discreet IR Dome cameras mounted inside the dispensary capture clear 4MP video of all activity at entrances and exits, in storage and equipment rooms, and at each point-of-sale (POS) system. In addition, Evolution 360° cameras from Oncam, a March Networks technology partner, are installed above the sales floor and in every corner to provide further panoramic coverage. Evolution 360° cameras are also installed on the dispensary’s exterior to capture people entering and exiting, as well as any activity in the surrounding parking lot and back loading area.

The cameras were selected and placed strategically to ensure that the system meets multiple legislated requirements, such as recording all activity occurring within 20 feet of any ingress/egress point, capturing clear video in all lighting conditions, and making sure that the recorded video is sharp enough to identify customer and employee facial features at each POS.

“Essentially, we need 100 percent coverage with no ‘blind spots’ on our retail floor, and a clear picture of people’s faces,” said Ryant, adding that the quality of the video captured by the March Networks and 360° cameras is excellent.

At the center of Complete Releaf’s video solution is a March Networks 8000 Series Hybrid NVR. The powerful recording platform provides IP and analog video capture and unparalleled reliability through features such as diagnostic LEDs, an internal battery backup, and a customized embedded Linux operating system. All IP channel licenses are included with the recorder, making it a convenient and cost-effective option for Complete Releaf.

Equally important, the recorder provides Complete Releaf with 32TB of internal storage so it is compliant with the state’s 40-day video retention requirement.

“March Networks makes a truly reliable product, and we’ve had no difficulties achieving our 40 days of archived video,” said Ryant.

While security and compliance were both top priorities for Ryant, finding a video solution that would also help him run Complete Releaf more efficiently – and profitably – was also important. That’s why he’s so pleased with the March Networks Searchlight for Retail software.

The Searchlight software enables Ryant and his team to proactively identify and review suspect transactions using integrated video and transaction data pulled from the dispensary’s Green Bits POS system. It provides them with an easy-to-use loss prevention tool that reduces the time it takes to investigate incidents from hours to minutes. It also arms them with strong video and data evidence to support successful prosecutions or recoveries.

“Having video surveillance in our dispensary definitely deters theft,” said Ryant. “Combining the video with transaction data goes a step further and really causes people to think twice before they do something they’ll probably regret.”

Ryant is also testing Searchlight for Retail in his cultivation facility, taking advantage of the software’s ability to integrate with data from the Radio Frequency Identification (RFID) tags he is required to add to each plant through the cultivation process as part of Colorado’s Inventory Tracking System (Metrc). The software would enable Ryant to leverage his RFID investment by making the data searchable in the Searchlight dashboard and tying it to recorded video. If there’s ever an incident during the cultivation process, Ryant could use the Searchlight software to easily locate the video footage to see what actually happened and who was involved.

Aside from the many benefits his video solution delivers, Ryant likes the support he receives from March Networks and Falcon Networks.

“Falcon Networks has been extremely accommodating and provided an ideal security plan for my business,” said Ryant. “And every level at March Networks, including its sales and sales engineering team, has been great. I definitely made the right decision.”