Flower Power Garden Centres, an Australian retailer with 10 locations in the Sydney Metropolitan Area, took a major step toward managing its point-of-sale losses when it acquired a March Networks Searchlight for Retail software solution.

“Searchlight is an absolutely fantastic tool for identifying fraudulent patterns and trends.”

“The Searchlight reports point me in the direction I want to focus on and give me a great overview of the transactions that have occurred,” said Nicol. “I can review refunds and voids, as well as sales under or over a certain amount, or identify training opportunities for cashiers handling certain types of transactions. Searchlight is an absolutely fantastic tool for identifying fraudulent patterns and trends.”

Finding losses from theft and fraud is critical for retailers like Flower Power. According to the 2014-2015 Global Retail Theft Barometer study, shoplifting and employee theft cost Australian retailers US $2.44 billion, or just above one percent of sales. Globally, employee theft accounted for 39 percent of total losses and shoplifting 38 percent, with the remainder attributed to administrative or non-criminal losses. 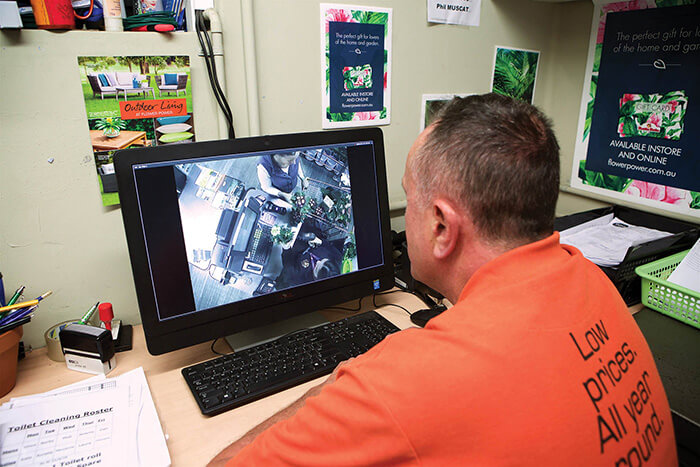 Flower Power Garden Centres was founded in 1958 by Nick Sammut, a penniless immigrant from Malta with a strong work ethic and a green thumb. Today, said Nicol, it’s a thriving family enterprise selling a wide range of flowers, trees, ornamental plants, patio furniture, barbeques, “and pretty much anything and everything to do with the outdoors from a garden perspective.”

Nicol was familiar with March Networks video surveillance technology prior to joining Flower Power in September 2015.

“I used March Networks for years at a previous employer — a large retail company. I found it easy to navigate and was impressed with its functionality, but the addition of Searchlight makes the March Networks system even more powerful because of the time it saves searching for video of refunds, voids and other transactions.”

The hybrid capacity of the March Networks recorders is ideal because it allows the garden centre chain to transition to IP over time instead of forcing it into a costly upfront infrastructure upgrade.

Managers of the individual garden centre can search for video recorded by cameras in their own stores, but Nicol alone has access to the Searchlight reports.

“Ease-of-use is important — especially for the managers in our garden centres who aren’t in the system every day,” said Nicol. “The March Networks system is easy to jump into even if you haven’t used it for a while.”

Nicol can access video from any of the 10 garden centers in Sydney and its surrounding communities from Flower Power’s Sydney head office, or while on the road or at home.

“I can review live or archived video from anywhere, anytime on my laptop using virtual private network access as long as I have a WiFi connection,” he said.

In addition to alerting Nicol to point-of-sale anomalies, the March Networks video solution also provides evidence for prosecution of thieves.

“We had several break-and-enters last year — three in our garden centers and another three in a wholesale location,” he recalled. “In one instance, they came in at night — sometime between midnight and 5 am, had free range of the entire nursery and got away with several thousand dollars worth of merchandise. Fortunately, the video evidence we captured with our March Networks system helped with the police investigation and was instrumental in their arrest.”

Video surveillance can play an important role in reducing the $2.44 billion in estimated annual losses from shoplifting and employee theft in Australia, but some solutions get the job done better than others.

Flower Power Garden Centres is happy with the choice it has made.

“I would definitely recommend March Networks technology for its reliability, ease-of-use and powerful Searchlight functionality, which takes so much of the legwork out of monitoring point-of-sale transactions,” said Nicol.