Ease of use and reliability put March Networks system on top

Managing security for Kansas City Power and Light (KCP&L), an electric utility serving 800,000 customers in Missouri and neighboring Kansas, is a huge responsibility. With a dozen power plants, 400 substations, 27,000 miles of transmission and distribution lines, service depots, and offices spread over an area of 18,000 square miles, KCP&L needed a video surveillance system that would allow centralized oversight and bandwidth-friendly access to video from the furthest reaches of its coverage area.

With so many cameras and locations to keep an eye on, an intelligent, integrated surveillance technology solution that automatically pops up video from an alarm site is critical.

“We are a very happy March Networks customer.” 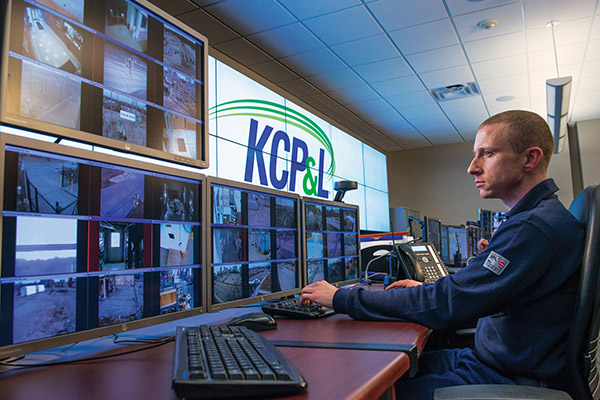 KCP&L Security Analyst Brian Meinershagen wasn’t involved in the initial decision to select a March Networks video solution, but he’s a big fan nevertheless. Whenever an opportunity presented itself to go back to the drawing board and evaluate competing systems, March Networks has always come out on top.

In 2008, for example, when KCP&L acquired competing utility Aquila Inc., security management had some decisions to make because the new acquisition was equipped with a video surveillance system from another vendor.

“An evaluation of the two systems ended in March Networks’ favor based on ease of use and reliability,” said Meinershagen. “Equally important was March Networks’ enterprise management software, which offered a superior central management capability. As a result of the evaluation, we equipped approximately 60 Aquila sites with March Networks systems.

“Near the end of 2014 when most of our original recorders were approaching their expected end of life, we did another quick re-evaluation of our options and decided to upgrade to March Networks 8000 Series Hybrid NVRs. Some of the units that we replaced at that time had been in service since 2002, far exceeding their expected lifespan.”

The 8000 Series recorders with built-in, multi-stream H.264 video encoding are ideal given the utility’s diverse set of bandwidth limited network topologies and backhauls. The multi-streaming feature allows KCP&L to record a high-resolution video stream at full resolution for investigation purposes, and capture a second video stream from the same cameras at a lower resolution for live viewing over the network.

Reliability is also a key requirement because of the vast territory KCP&L encompasses.

“It may be a three or four hour drive just to get to one of our NVRs if we have to change a hard drive, so reliability is extremely important to us,” said Meinershagen.

KCP&L relies primarily on analog video, but has installed IP megapixel cameras in some locations where higher resolution is required.

“That’s another feature of our hybrid NVRs that we like,” said Meinershagen. “We can add IP cameras as required since the recorders support both analog and IP video.”

The KCP&L security department is tasked with keeping employees safe and protecting the utility’s assets. A video wall consisting of twelve, 55-inch monitors provides five security staff in the 24/7 control center with an overview of real-time activity at hundreds of sites. Monitoring center staff also oversee access to the utility’s unmanned doors and gates, using an intercom and integrated video to confirm the identity of visitors.

One of the biggest external risks KCP&L and many other utilities across the U.S. have to contend with is the theft of copper.

“In a generating facility, it’s not uncommon to find materials staged for new construction, or pending decommissioning that contain valuable copper,” said Meinershagen.

Copper is attractive to thieves and easy to turn into cash. The U.S. National Insurance Crime Bureau reported 25,083 claims filed for metal theft between 2009 and 2012, of which 96 percent were thefts of copper. In 2011, when copper prices surged to $4.50 a pound, copper theft spiked as well to close to 15,000 claims.

KCP&L hasn’t been immune to copper theft, but it has been able to catch many thieves in the act thanks to its use of wire cross video analytics and other sophisticated intrusion detection alarms integrated with the March Networks video surveillance system.

“We had one incident at a generating station a few years ago. It was Christmas day and we had a skeletal staff. An intrusion detection sensor triggered an alarm and popped up video from a camera at the site. We were able to track and follow the intruder as he went through the station’s scrap metal bins and inform police dispatch of his exact location. When you notify the authorities that you are tracking an intruder on camera, they know they aren’t dispatching responders to chase a false alarm. This typically gets you a much better response. And when you follow up and provide evidence of the criminal behavior in court, the chances of getting a conviction are a lot higher.”

“Our March Networks system provides us with tools to comply with these regulations by allowing a few security personnel to monitor and respond to alarms in multiple locations virtually without leaving our Security Control Center,” said Meinershagen.

The video recording system is primarily used for security, but non-security employees across the company also utilize it for operational oversight at generating stations to monitor coalveyors, remotely operated stackers and tanks of hazardous chemicals for leaks.

KCP&L routinely equips its 8000 Series Hybrid NVRs with the maximum four hard drives for a total of as much as 16 TB of internal storage. The utility hasn’t set a single standard for retained video, but by maxing out its storage capacity, evidence of reported incidents is always available and able to be saved for authorities and use in court proceedings.

“We are a very happy March Networks customer,” said Meinershagen.