When the City of Whitehall, a central Ohio community of approximately 20,000 people, went looking for a new video surveillance system in March 2018, IT Director Bret Henninger had three primary requirements: reliability, redundancy and ease of use.

The March Networks solution proposed by Keytel Systems, one of three system integrators responding to the city’s RFQ, met all three of those requirements.

“Our previous system was outdated and not easy to use, and there were constant failures,” said Henninger. “It got to a point where it was costing us more to keep it going than to simply replace it.”

Keytel Systems, a March Networks certified partner based in nearby Reynoldsburg, designed the new video solution to ensure that it met the city’s reliability and redundancy criteria.

“They were key requirements, no doubt about it,” said Keytel Systems CEO Kristopher Haley. “We did everything we could to avoid downtime.”

To ensure continuous, failsafe video recording in the City of Whitehall’s police department, Keytel installed March Networks Command Recording Software on dual servers. If one goes down, the backup server automatically kicks in, eliminating any loss of video.

For added redundancy, each of the city’s March Networks cameras — including SE2 Series domes, ME4 Series bullet cameras and Oncam 360° cameras — is also equipped with internal MicroSD cards, so video will record to the cameras themselves in the case of a network interruption. Once the issue is resolved, an innovative March Networks Shadow Archive feature ensures that any video on the camera cards is transferred back to the main recording server in exactly the right place, for seamless searching and archiving.

Finally, as a further guaranty of uninterrupted recording, Keytel divided the cameras in the police department between two separate switches. If one switch malfunctions, the cameras connected to the second switch will continue to record.

The March Networks solution provides the City of Whitehall with more than enough capacity to archive video evidence captured in the police department’s lobby, sally port, jail cells and around the building exterior for a mandatory 90 days. It also supports the city’s required two years of archiving for video and audio recorded in the police department’s interview rooms.

“It allows us to drill down and zero in on a particular timeframe, whereas our previous system took us three times longer to find a 30 second clip.” 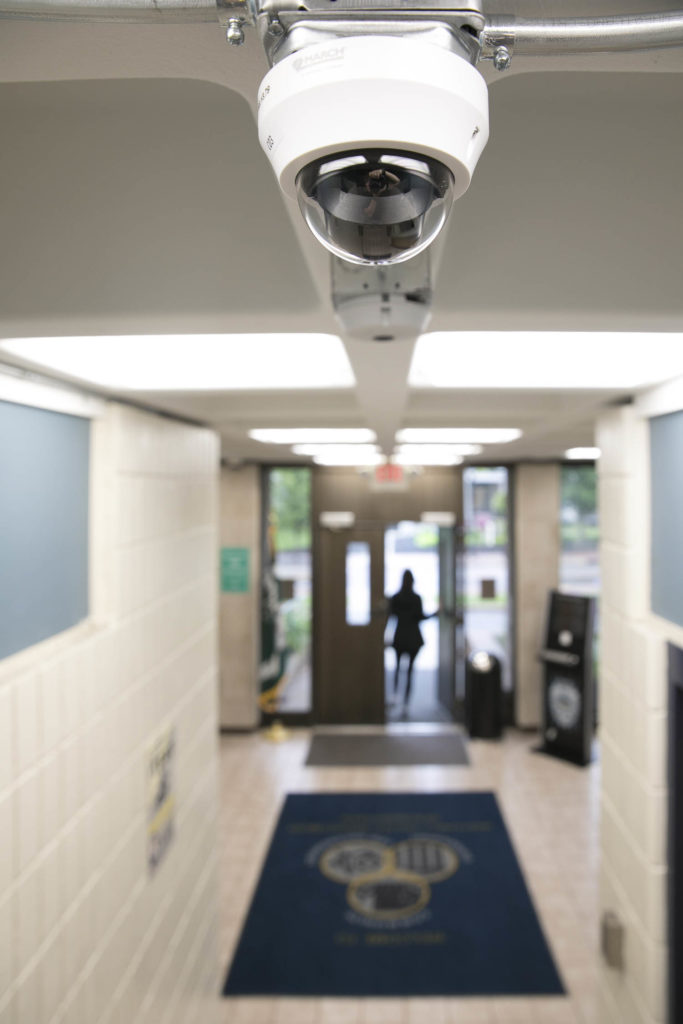 With as many as 55 City of Whitehall law enforcement personnel and staff using the video solution, ease of use was also essential.

“We didn’t want to spend a ton of time going through video to find what we needed, so I was particularly impressed with March Networks’ search capability,” said Henninger. “It allows us to drill down and zero in on a particular timeframe, whereas our previous system took us three times longer to find a 30 second clip.”

A combination of features available in the March Networks Command Client software ensures that authorized City of Whitehall users waste no time finding the video evidence they need. A timeline search enables users to move from months to minutes quickly, while video thumbnails make it easy to spot particular incidents in the recorded video. A smart search tool also allows users to easily search for any motion within a designated area, such as a specific location in the parking lot or lobby.

Once the police department’s video system was up and running, the City of Whitehall turned its attention to extending the March Networks solution to its service garage and fuel depot, where fleet maintenance and repairs are performed on the city’s snowplows, trucks and public safety vehicles.

“Our previous video system wasn’t able to work with third-party surveillance cameras, so that was another differentiator for March Networks,” said Henninger.

Finally, the City of Whitehall is using a March Networks Command Center solution in its 911 dispatch department. Command Center enables dispatch staff to display video from multiple cameras on large, smart TVs for immediate, citywide visibility. The solution supports up to 32 cameras per monitor and provides advanced alarm monitoring, management and escalation. If an emergency occurs, the video display helps 911 staff see exactly what’s happening so they can make informed decisions about how to best respond.

The City of Whitehall intends to continue rolling out March Networks technology. It plans to upgrade the system at its City Hall building within the next 12 months, and to continue replacing existing third-party cameras with new March Networks IP cameras as required.

Henninger couldn’t be happier with the city’s choice of Keytel and March Networks.

“One thing we try to do at the city is to build long-lasting public-private partnerships with suppliers to help us meet our needs today, and also well into the future,” he said. “Keytel has provided us with high-quality customer service throughout this entire project and is a supplier we know we can count on in the future.

“As our city continues to expand our video system infrastructure to improve security and operations, and to connect multiple departments to shared video resources, we plan on moving forward with March Networks.”