When the 226,000 residents of Scottsdale, Arizona, turn on their taps, they can be confident that every effort has been made to ensure there is sufficient water, that it’s of the highest quality and safe to drink.

That’s saying a lot given the fact that Scottsdale receives an average of only eight inches of rainfall per year, compared with the average annual rainfall of close to 40 inches for the United States as a whole.

Ensuring an adequate, high-quality water supply for large population centers like Scottsdale and neighboring Phoenix in the arid U.S. Southwest is a mammoth undertaking. Water from the Colorado and other rivers, as well as underground aquifers, is collected, stored and conveyed through a series of dams, reservoirs and canals to municipal water treatment and pumping stations.

Water quality is assured through rigorous testing for contaminants, but in the post 9/11 world of global terrorism, the safety of the water supply is equally dependent on a comprehensive security plan incorporating access control, video surveillance and patrols by security personnel.

“Each remote site has a four- or eight-channel recorder with both fixed and PTZ cameras, so (security staff) can pan around the station to determine what triggered (an) alarm and dispatch police as required.” 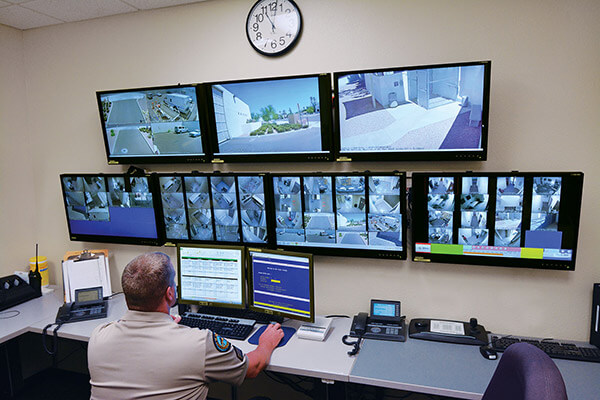 The City of Scottsdale Water Resources Department takes the security of its water supply seriously.

The department started with a vulnerability assessment performed in compliance with the U.S. Department of Homeland Security and Environmental Protection Agency requirements soon after 9/11, and began deploying March Networks video surveillance systems in 2004, said Jeff Fritsch, the department’s training, safety and security co-ordinator.

“We identified approximately 82 sites that needed to be protected by some type of security. That included water treatment plants, water recla­mation facilities and water well sites.

“Scottsdale has a lot of levels to its landscape, so we do a lot of pumping of fresh as well as reclaimed water at pumping and sewer lift stations throughout the city,” he explained. “We have access control and March Networks video recorders at most of these sites.”

The main Water Resources campus and treatment center are connected via fiber to the municipal network, but a radio communication system provides wireless connectivity at the pumping and water well stations. Given the communication challenges at the remote sites, the city required a video surveillance solution with robust performance monitoring and bandwidth-friendly video compression, said Fritsch.

Both were key requirements in the city’s evaluation of video surveillance systems.

March Networks’ advanced video compression gives the city the ability to transmit high quality video from its remote sites, while a health monitoring feature in the video management software alerts city staff to potential connectivity or system issues so they can be addressed before they can affect performance.

“If they get a motion or door contact alarm, they can pull up live video from the site to see what’s going on,” said Fritsch. “Each remote site has a four- or eight-channel recorder with both fixed and PTZ cameras, so they can pan around the station to determine what triggered the alarm and dispatch police as required.”

The Scottsdale City Jail, for example, has been equipped with a state-of-the-art, server-based system with 68 IP cameras powered by March Networks Command Enterprise software. The browser-based client allows authorized jail staff to access live and archived video from any computer, eliminating the need for City IT staff to install, manage and update software on individual workstations.

Command Enterprise can be installed on commercial-off-the-shelf (COTS) servers and supports appliances running in VMware and other virtualized environments. It also allows users to access live video remotely – from any location – using their smartphone or tablet with March Networks Cloud.

The City Jail monitors its own cameras, but video from most other municipal sites is centrally monitored from Scottsdale’s Municipal Security control center.

Using the March Networks software, system administrators are able to give Jeff Fritsch in Water Resources, security staff at City Hall and other municipal employees access to video from areas they oversee.

Ease of use, reliability, video quality, compression and storage are some of the key items that municipal security managers need to take into consideration when designing a video surveillance system, advises Allen.

In a world increasingly susceptible to unpredictable acts of violence and terror, a robust, state-of-the-art security system like the City of Scottsdale’s is the best insurance for ensuring the safety of a city’s water supply and the security of its citizens.