When Should You Install a 360° IP Camera?

If you’ve attended an industry tradeshow lately, you’ll likely have noticed that 360-degree IP cameras are suddenly everywhere and generating a ton of marketing buzz. And there’s a good reason for that.

Aside from being very cool technology, the latest and greatest 360-degree cameras have decidedly practical applications in retail, banking and commercial/industrial environments. One well-selected, strategically located 360 camera can give you a complete overview of a location, while reducing your camera count and saving you money.

If you’re in retail or banking, for example, and looking to upgrade from analog to IP video, a 360 camera is a great option for capturing daily activity at your site, especially when used as a complement to other high-definition IP cameras dedicated to capturing bill denominations and similar transaction details.

A 360 camera can also be an excellent alternative to a standard pan-tilt-zoom (PTZ) camera in a retail store, for example. Think about it. When a PTZ is pointing in one direction, that’s the only video you’re capturing at that precise moment. With a 360-degree camera, on the other hand, you’re recording everything all the time, so nothing is ever missed. However, you still have to do your homework because not all 360s are alike and some will suit your needs better than others.

All De-Warping is Not Alike!

The fish-eye image captured by a 360 camera has to be de-warped, and this is where it pays to do your research. Some manufacturers do the de-warping on the camera itself, enabling you to choose two 180-degree views, four separate views or a warped 360-degree view. Unfortunately, you can’t do a digital PTZ within these views and, once you’ve made your choice, you have to live with it because that’s all that’s been recorded. (See image A) Other 360 cameras record the 360 view and do the de-warping in the software client, putting you in the driver’s seat. You can choose to look at 360 or 180-degree panoramic views, as well as multiple views in a grid, perform a digital PTZ to zoom in on any part of the scene and change the view at any time. You’re never locked in. (See image B) 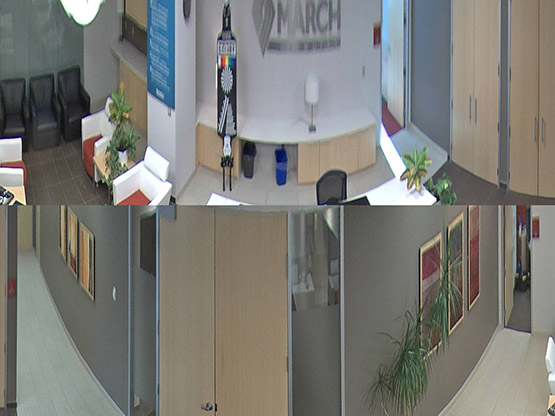 Image A: A view from a competitive 360 camera with dewarping done on the camera.

Image B: A view from a March Networks MegaPX 360 Indoor Dome with dewarping done in the client software.

A 360 camera is extremely useful and can take the place of multiple cameras to capture scene overviews, but it isn’t meant for every type of application. Make sure you’re clear on the quality of the images you need and the coverage you’ll get based on the size of your location and your ceiling height. While every application is different, here are some general guidelines to help:

At 10 feet, images captured by a MegaPX 360 Indoor Dome enable you to identify a person’s face and other details.

At 15 feet, you can still recognize individuals and clearly see all activity in the scene.

At 35 feet, you have a great overview of your entire location, though some details are harder to distinguish.

The 360-degree camera has come a long way in just the last few years. You can now buy multi-megapixel domes that will give you exceptional image quality in an inconspicuous form factor. A 360 camera helps you reduce your camera counts in many instances, while increasing your coverage or complementing your coverage in a multi-camera deployment. Either way, it’s important to understand your requirements, the area you’re trying to cover and the pros and cons of the different kinds of 360 cameras on the market.