The popularity of 360° cameras continues to grow, and for good reason. These cameras have the ability to capture large areas of a scene with no blind spots, which means that adding them to your surveillance solution can help reduce your overall camera count.

Oncam’s C-Series 360° cameras feature Multi-Mode technology, making these 12MP 360° cameras and 8MP 360° cameras even more versatile. They can be 360° cameras, 180° panoramic cameras – or both at the same time. With Multi-Mode, you can choose to stream up to four different views simultaneously from one camera.

The following outlines the views Multi-Mode makes available from a single 360° camera:

This is the standard 360° fisheye view, ideal for total situational awareness. Using this view, you’ll get 100% coverage in real-time and on playback with no blind spots. And since you have total 360° situational awareness, there’s no chance of your camera being pointed in the “wrong” direction. 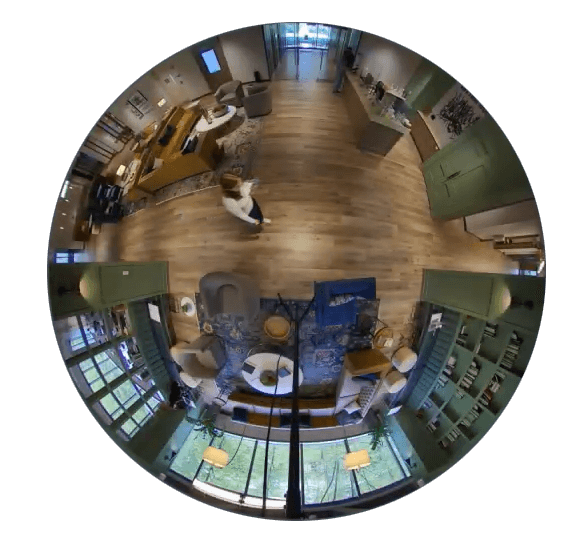 Panoramic+ solves issues such as stitching, alignment, light balance, and blind spots. These images are a true edge-to-edge dewarped view of the original fisheye image taken from the center of the scene with an extended vertical field of view (FOV) and a super-wide aspect ratio of 5:2. This view uses the center of the fisheye sensor to generate a true 180° image.

When mounted at a height, panoramic cameras require physical tilting. Specially designed accessories are available that can help tilt the camera to the desired angle.

Panoramic+ works well for an enhanced wide view on passing traffic. And when the camera is wall mounted, you’ll also get a better view of peoples’ faces at, for example, a point-of-sale (POS) area, a reception desk area, or in a hallway. This view is also useful for perimeter protection when mounted on a outside wall, fence, etc.

This view is a split two-way hallway view from a ceiling-mounted camera. It allows you to watch both directions of a 360° image at the same time (with no blind spots) so that individuals and objects can move seamlessly from one view to the other.

Corridor+ enables you to see two perfect halves from the entire hallway image side-by-side, which allows you to monitor both directions of the scene at the same time. Since the two images appear without a gap, individuals and objects move seamlessly from one dewarped view to the other.

In addition to being useful for indoor hallway surveillance, this view is also helpful for monitoring shopping center aisles, server farms, or for street surveillance.

From a ceiling-mounted camera, T Corridor+ allows you to see in all three directions (for example at a hallway junction) at the same time with no blind spots even when individuals and objects move from one view to the other.

Similar to Corridor+, this view benefits from technology that centers the view, which provides three natural-looking views of a hallway junction. You also save bandwidth by focusing on what matters most.

A VCam or Virtual Camera is a user-defined dewarped view of a specific chosen area of the fisheye image. It enables you to focus on one particular area without losing the overall view being recorded with the 360° view. Up to four separate VCams can be created, or up to three alongside the fisheye stream.

This view is particularly useful at building entrances and exits, POS areas, and reception desk areas. 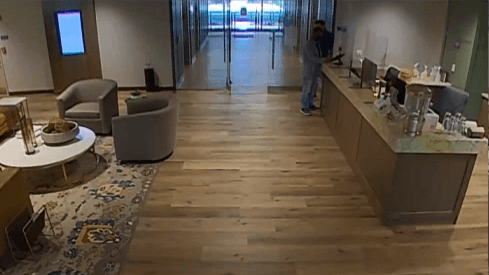 Multi-Mode allows you to record everything that happens in a scene thanks to the 360° coverage from the fisheye stream, but at the same time makes it possible to set up other specific views for ease of use.

For example, the 360° view can be used for retrospective investigation, while the different dewarped views can be displayed on a control room screen for more natural live viewing. You can also run streams at different frame rates and decide which streams to watch or record at which frame rate.   Conveniently, March Networks Command™ Client software version 2.14 fully supports Multi-Mode, so our customers can take advantage of this feature when using Oncam’s new C-Series cameras.

With cameras featuring Multi-Mode, you get total situation awareness and the flexibility to stream the views that best suit your particular needs.  Learn more about Multi-Mode by viewing the video or visit the C-Series.

Read “Three features to look for in 360-degree camera technology”
Sign up for our newsletter here Get the latest news and information on our IP video products with March Networks News. Subscribe now