So it was a change for Ishikawa, Senior Vice President and Director of Corporate Security for the Bank of Hawaii, to get used to the idea of authorized staff from the bank’s branch division being able to review video for operational, compliance and marketing-related purposes. The insights collected from the video are helping the bank make more strategic decisions about staffing, customer service and even future branch design.

“Our March Networks surveillance platform is providing us with some significant business and non-security-related uses,” Ishikawa explained.

“[Searchlight for Banking is] a huge plus for us. Our executive management team can see the benefits of the video solution, and the future possibilities for this data.” 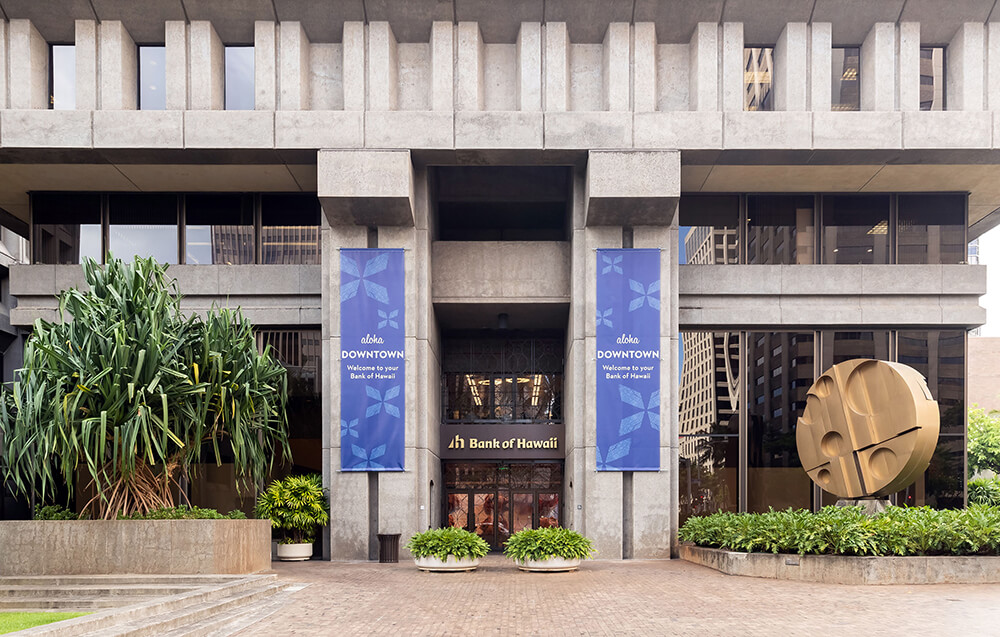 Bank of Hawaii, which operates 69 branches and 373 ATMs across Hawaii, American Samoa and the West Pacific, is currently using March Networks Searchlight for Banking software to gather business intelligence at its branches. Searchlight’s mix of surveillance video, teller/ATM transaction data and analytics delivers valuable insights into the bank’s operations, as well as helping to enhance security and uncover fraud.

“Our branch division folks look at the data to get ideas on how we should do our branch operations or staffing differently,” he said. People counting data — collected by FLIR Brickstream3D sensors integrated with the Searchlight software — tells them which entrances and exits are most used so they can place marketing materials in high-traffic areas. The information is also being used to help determine future branch layouts. Queue length and dwell time data, meanwhile, help them understand their busiest time of day, and day of the week, so they can staff branches appropriately.

“It’s a huge plus for us,” said Ishikawa. “Our executive management team can see the benefits of the video solution, and the future possibilities for this data.” 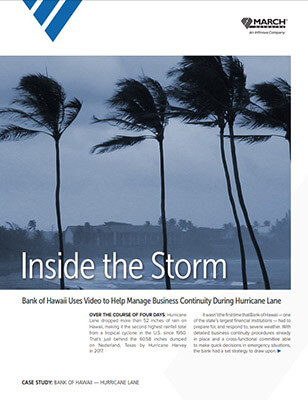 A forward-thinking bank that’s keen to try new technology, Bank of Hawaii began exploring Searchlight after its success with March Networks’ other video surveillance products. The bank first started using March Networks systems in 2015, when it was time to upgrade its legacy DVRs.

At the time, Bank of Hawaii was relying on two different video platforms, and it wasn’t happy with their performance. After enlisting the help of a consultant, and doing his own research at security tradeshows, Ishikawa says the decision to go with March Networks was clear.

“I remember asking some of my banking counterparts, ‘Hey what are you guys using?’ And they strongly recommended March Networks,” he recalled. The consultant came to a similar conclusion.

“He said, ‘March Networks’ products are really engineered for the banking environment,’ so that helped us make the decision.”

Bank of Hawaii is currently using March Networks 8000 Series Hybrid Network Video Recorders (NVRs) in about half of its banking branches. The Linux-based devices provide reliable video surveillance recording and management, and are also easy to service, which is a huge bonus for Ishikawa and his team. In addition, the 8000 Series rack mount units feature an innovative “dock and lock” station that allows technicians to easily remove and service the recorder while leaving all rear connections clean and organized in place.

“With other companies, you have to power down the recorder for several minutes to service it, and that means unplugging and re-plugging all the inputs. You miss a number of minutes of recording during that time. With March Networks, we’re able to just pull out the hard drive and pop in another one without taking the NVR offline,” he said. “That’s huge for us.”

According to Ishikawa, Bank of Hawaii also appreciates the 8000 Series’ hybrid support, which allowed the bank to continue using its existing analog cameras, and the motion histograms in March Networks Command video management software, which show Ishikawa and his team where motion occurred and helps them rapidly locate video evidence.

“Command’s modern interface is really user-friendly, and it’s very easy to find video,” said Ishikawa. “When someone is telling you, ‘Hey we had a problem at this branch this morning, I don’t know what happened, but it must have been around this time’, we’re able to find that video much more quickly on a March Networks platform.”

For security at its bank machines, Bank of Hawaii has installed MegaPX ATM Cameras, which are purpose-built for ATMs. Video is integrated with the bank’s ATM transaction data in the Searchlight software for rapid investigations into customer complaints and potential fraud.

“It’s so easy to search,” said Ishikawa. “It takes us exactly to that transaction and the associated video so we can figure out what transpired.”

The bank is also integrating its teller transaction data with video in Searchlight for more comprehensive oversight of its branches. The combination of video, transactions and analytics helps it get a more holistic view of its services.

“Transaction data is not always indicative of how busy a branch is,” Ishikawa said, noting that lengthier conversations at the teller counter often create value because the customer returns later to access another bank product or service. Having video and analytics is an added layer of information.

“In the past, whenever there was an issue, we had a uniformed security member head out and physically check the branch. But with virtual patrols, we can do fewer physical visits and, when we do visit, it’s a more meaningful visit.”

The security team, for example, can keep an eye on issues with vagrancy and loitering by simply logging into the Command software. March Networks video has helped the bank successfully address some of these issues.

In one case, a person was routinely visiting a branch and causing disruptions by yelling and throwing deposit slips on the floor.

“We don’t always know the situation, but if a person is yelling or displaying erratic behavior, they pose a risk,” said Ishikawa.

Capturing video of the incident helped underscore the serious nature of the situation.

“We were able to show police that this was not a minor disruptive party. It was a very concerning issue for us. And it wasn’t just our bank, it was occurring in other banks, too.”

Going forward, Bank of Hawaii is planning to migrate its remaining retail branches to March Networks.

Given the widespread benefits of intelligent video, Ishikawa predicts that, like him, more bank security managers will receive requests to share their video surveillance securely with other departments.

“In the future, it won’t just be security that’s asking for a video upgrade,” he said. “It’s going to be other parts of the business saying, ‘We want a piece of the pie too.’ Because surveillance is more than just investigating a fraud or robbery incident. Now, video surveillance is a lot more than that.”