Dime Community Bank has called Brooklyn home for more than 150 years. Founded in 1864 when a gallon of milk cost just 25 cents and rent on a one-bedroom apartment was $40 month, today the financial institution serves the New York borough and surrounding metropolitan area with 29 retail banking branches and 24-hour ATMs.

The bank has always been committed to the highest security standards. That’s why, in the latter half of 2017, it took stock of its security systems and found them in need of a dedicated upgrade. The existing video security system lacked sufficient onboard storage to satisfy the bank’s archiving requirements, and there weren’t enough cameras to provide optimal surveillance coverage. In addition, when the bank opened two new branches, Security Director David Panetta couldn’t get the existing ATM transaction integration software to work.

“The video quality with the IP cameras is unbelievable. You can see the difference right away.”

Panetta also wasn’t satisfied with the bank’s alarm and access control systems. It was clearly time for a complete overhaul and a new security system integrator that could provide an all-encompassing solution.

Dime Community Bank turned to national systems integrator NAVCO, and by April 2018 it had new alarm and access control systems. All 29 branches, as well as its head office and two other office facilities, were also equipped with an industry-leading March Networks intelligent video solution.

“I recommended standardizing on March Networks because I’ve had a good track record with its products over the years,” said Bill Webster, NAVCO’s Vice President of National Accounts. “I lead with March Networks for all of my banking clients.” 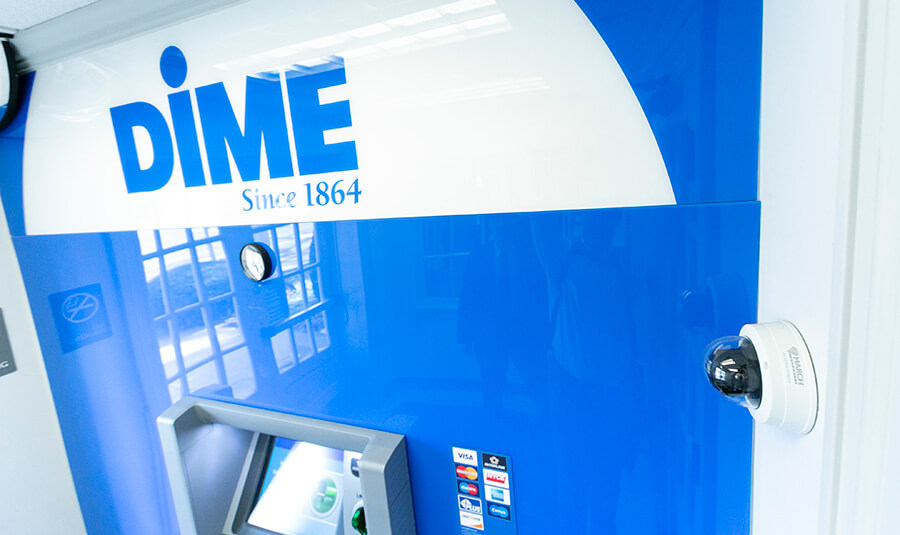 The hybrid capability of March Networks’ 32-channel video recorder is ideal for Dime Community Bank because it allows the financial institution to continue using existing analog cameras along with its new March Networks IP cameras for improved coverage within its branches. To achieve its desired 100 days of archived video, the recorders are loaded with two 6TB hard drives. Next year, Panetta hopes to go 100 percent IP with March Networks cameras, and to increase onboard storage to 22TB per recorder.

“The video quality with the IP cameras is unbelievable,” said Panetta. “You can see the difference between the analog and IP cameras right away, and I never thought the analog was that bad.”

Dime Community Bank managers have access to video from their own branch and are finding the system easy to use, said Panetta.

“Recently, for example, one of our branch managers in the Bronx called me about a customer who questioned a deposit on her statement, because she didn’t remember making it. I was on the road, but walked the manager through using the March Networks software on the phone. I told her to open Searchlight, put in the transaction date, scroll down to the transaction in question and click on the link to the video. It was the first time she did it and she said, ‘Oh wow, there it is.’

“The video clearly showed the customer making the deposit. She had just forgotten. Our manager had no trouble navigating the system and was very impressed when I told her she could also do it with teller transactions.”

Panetta, who can also access video remotely from his home computer, uses the March Networks solution to check on a branch if he receives an alarm at night.

“I had an alarm go off a few weekends ago, and when I checked the video, everything looked fine. However, there was a tablecloth on a table under an air conditioning vent that was swaying back and forth in the breeze, and must have triggered the motion detection alarm. I called the cleaning company later that night and had them remove the tablecloth.”

A third-party monitoring company that conducts virtual tours of all of the bank’s branches every night also has remote access to the March Networks video solution.

“Instead of having a roving guard tour that would only be able to cover a handful of branches, I’m getting all of our branches checked at least 10 times every night,” said Panetta.

“The remote monitoring company goes into the system, pulls up video from a specific site and does a quick check, paying special attention to the ATM lobbies, the safe deposit areas and the cash dispensing machines. If they see a homeless person camping out in one of our ATM lobbies, they’ll call the NYPD to have the person removed. I get a daily report every morning, and pull still shots of anyone who was reported loitering, so I have a record of who was there.”

Being able to access video from 29 branches spread across Brooklyn, the Bronx and Nassau and Suffolk counties on Long Island is especially handy given New York’s infamous traffic congestion.

“Every once in a while,” said Panetta, “I say I’m going to run over to a branch to do something, and then I catch myself and say, wait a minute, I can just look at the video.”

“I’m extremely pleased with both NAVCO and March Networks,” he said. “NAVCO has been very attentive to our requirements and they’re always available when I need them. I have the cell phone numbers for several of their techs and I have a great relationship with them. I was away one weekend and had a problem with one of my sites at 10 pm on a Saturday night, but the tech figured out what the problem was and took five minutes to resolve it.”