For more than 50 years, the Eickhoff family has owned and operated grocery stores in Burlington County, New Jersey. Today, two generations of Eickhoffs run five ShopRite stores in the community, serving the needs of approximately 450,000 residents.

As independent grocers, the Eickhoffs are part of the Wakefern Food Corp., the largest retailer-owned cooperative in the United States. Being co-op members allows the family to collectively purchase products with 50 other member companies, and remain competitive against larger, multi-national chains.

Part of staying competitive also means having an effective risk management program, and March Networks video surveillance is one tool that is helping on that front, says John Troxel, Director of Risk Management for the supermarkets.

Troxel joined Eickhoff’s Supermarkets approximately six years ago. At that time, the grocer was using a mix of different video systems with limited capabilities.

“We had four different types of video systems and on each of those I was only able to record one camera at a time,” explained Troxel. This made it difficult to capture movement within the grocery stores — some of which are as large as 90,000 square feet.

“March Networks makes a fabulous product that we’re more than thrilled with. I believe it’s the best product for our money.”

A product that’s going to last

The first installation took place at the company’s Burlington site in 2015. The newly-designed store is using March Networks Command Professional video management software, a powerful single-server solution that can support up to 128 video channels. A variety of March Networks IP dome, PTZ and bullet cameras, as well as third-party cameras, are installed inside and outside of the store. 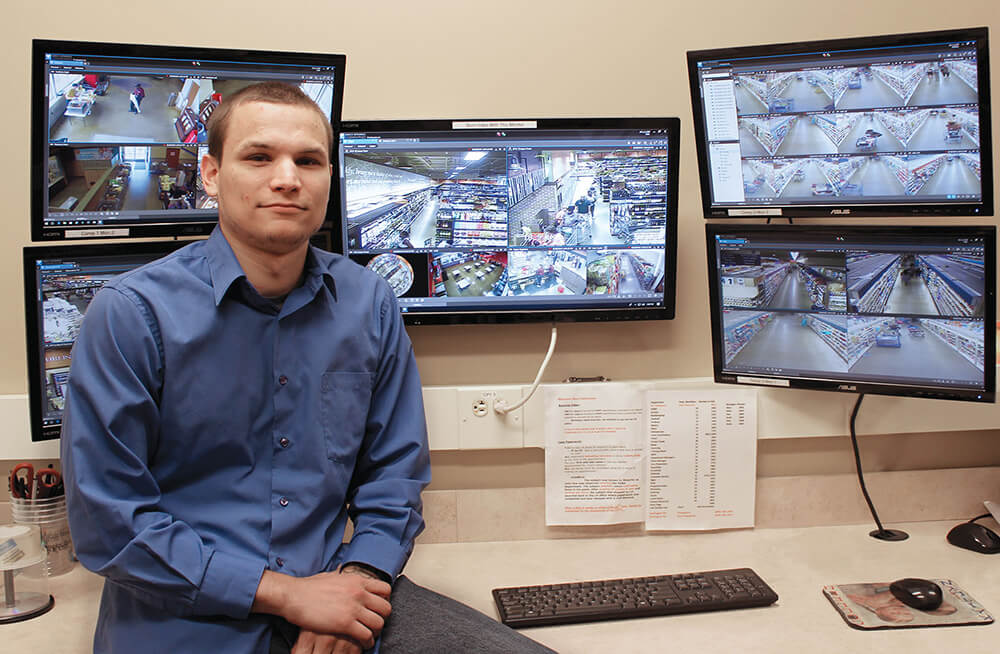 Verifying the facts with video

Almost immediately, the company turned to the solution to help review several liability claims. Thanks to clear video from the system, Troxel was able to successfully investigate allegations about hot soup spilling onto customers.

“There were claims of, ‘faulty cups.’ But based on the video, and the actions that the customers took at the soup and salad bar, all three claims were denied.”

The high-resolution images provide Troxel and his team of 16 risk management investigators with the ability to see important details when investigating service and compliance issues.

“The video quality is amazing,” he said. “We monitor cashier activity, like cashier compliance, coupon checks, and whether or not cashiers are checking the bottom of the shopping carriage.”

The system also helps Troxel’s team investigate shoplifting. Meat, alcohol, and health and beauty items are particular targets for thieves, but having high quality video images has made it possible for all of Eickhoff’s ShopRite stores to be on the lookout for suspects.

“Command’s ability to synchronize cameras, and to play back video so easily, allows us to identify suspects. We can capture a picture of that person and circulate it to our stores,” said Colin Gubernick, the company’s Senior Investigator.

The software’s motion histograms and timeline features dramatically speed these investigations, he added.

“Rather than watching eight hours of video, I can watch a few minutes of video over an eight hour time period just based on the motion,” Gubernick said. “It’s an enormous time savings.”

In addition to shoplifting incidents, the video solution has also captured a number of incidents in the grocery stores’ parking lots.

“I can’t even tell you the number of times we’ve been able to provide the police with video of automobile accidents. We can see the make, model and license plate number of the vehicles involved.”

In one incident, an outdoor camera captured the license plate and vehicle ID number of a commercial truck that had knocked over a telephone poll at the back of the grocery store. Eickhoff’s Supermarkets was able to track down the trucking company involved and collect damages.

“Without the video, we would have been on the hook for that,” he said.

“I went from a Model T to a Ferrari,” he said, recalling the limited capabilities of his old video recorders. “March Networks makes a fabulous product that we’re more than thrilled with. I believe it’s the best product for our money.”

“I can’t say enough good things about Rick and his team,” Troxel said. “They’re professional, their techs are beyond knowledgeable and they represent March Networks’ products well.”