Check Into Cash uses March Networks video surveillance at 687 of its 915 U.S. locations

Prior to joining Check Into Cash, one of the largest money service businesses in the United States, Bill Dyer, Director of Safety and Security, spent 30 years in law enforcement with the Bradley County Sheriff’s Office in Cleveland, Tennessee.

Having experience as both a police officer and a director of security for a large retailer, Dyer knows better than most the value of high-quality video evidence.

“As a law enforcement officer, I responded to many, many robberies,” he said. “The first thing we would ask is if they had video, but too often all we got was a video clip of ‘Shadow Man’. All you could tell was that it was a human form. It could have been anybody.” 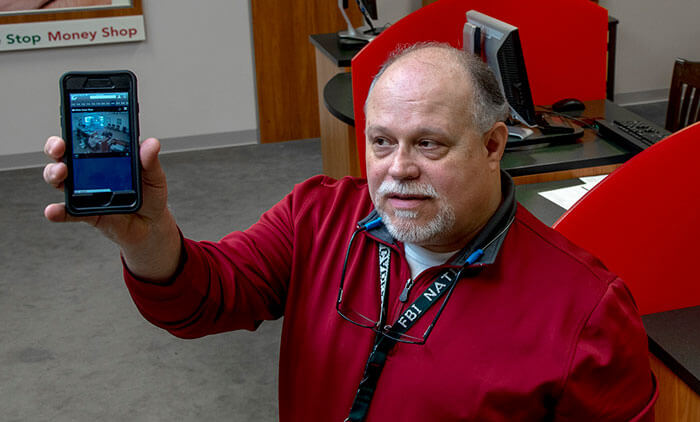 “I have literally had police departments call me and say ‘Wow, that’s the best picture we have ever received.’”

Blurry or pixelated video images haven’t been an issue for Check into Cash since Dyer started deploying March Networks video surveillance systems in their locations.

The company began using March Networks video recorders in 2013, shortly before Dyer was hired. The recorders were one of six or seven different digital video surveillance systems Check Into Cash was using, in addition to more than 400 VCRs.

“I don’t recall those other systems solving many crimes based on the video, but when we started experiencing incidents at stores with March Networks systems, the police started making arrests. Some of the pictures from the March Networks systems were so clear, it was like the robbers were sitting for a family portrait.

“I have literally had police departments call me and say ‘Wow, that’s the best picture we have ever received.’”

In one incident, two robbers held up a store wearing security guard uniforms. Video from the March Networks system was so clear that Dyer was able to read the patches on the criminals’ shoulders and contacted the company to ask if they had had any of their uniforms stolen.

Armed with the crystal-clear video clip, police were able to make an arrest within two hours.

Robberies aren’t the only incidents the March Networks video solution is able to help resolve.

“Just the other day, a customer in one of our stores said he left his cellphone on the counter,” said Dyer. “I pulled the video and saw the customer behind him pocket the phone. It was as clear as day. Another time, a lady received her money from the counter and unfortunately dropped it on the floor on the way out. When I pulled the video, I was able to see another customer pick it up and put it in her pocket.”

Finding video is quick and easy using March Networks’ preview thumbnails and a motion histogram capability that enables users to rapidly pinpoint segments of the timeline with more intense activity.

“I don’t have to sit there and watch eight hours of video,” said Dyer. “I can just zero in on the spikes and get right to it.”
Founded in 1993, Check Into Cash provides customers with short-term payday and cash advances, check cashing, Western Union transfers, walk-in bill pay service and prepaid U.S. Money Cards. The company operates 915 stores across the U.S. and the United Kingdom. Approximately three quarters of the locations are now equipped with March Networks 8000 Series Hybrid Network Video Recorders (NVRs). The company is in the midst of transitioning to March Networks Command Enterprise video management software, and records video from third-party analog and IP cameras.

Easy to use system

Aside from the high quality of the video, Dyer is impressed with the ease of use of the company’s March Networks solution.

“I hated getting requests for video from anything other than a March Networks system because it was so simple to use,” he said. “It was easier to navigate, the pictures were clearer and the equipment seemed to last longer.”

Dyer also likes how easy it is to export and share video evidence from the March Networks systems with law enforcement. With other systems, said Dyer, police officers on the receiving end would often call and complain that they couldn’t figure out how to play the video clip. With the March Networks solution, a player is automatically exported along with the video clips to ensure there are no issues with playback.

“In many robbery cases, I’ll pull up the video when the police are still in the store,” said Dyer. “I get the detective on the phone, tell him I have video of the suspect’s face and email it to him while he’s still at the scene. I have had them say, ‘We know this guy. We’ve arrested him before.’”

Dyer, who is based in the company’s head office in Cleveland, Tennessee, 30 miles northeast of Chattanooga, can’t respond to every request for video, so Check Into Cash district and regional managers across the country also have access to the system.

“That’s another great March Networks feature,” said Dyer. “We set the system up so that each district and regional manager has their own login and is only able to see video from their specific stores. If you’re a manager responsible for locations in Indiana, for example, you won’t be able to see video from our California stores.

“This partitioning gives authorized managers the ability to go in and review an incident, whether it’s a robbery or an internal issue. That’s a big help because if I had to do all the investigations, it would be a little overwhelming.”

To ensure the video solution is always functioning optimally, March Networks software includes a health monitoring feature that alerts Dyer to potential system issues, such as a failing hard-drive. The enterprise-wide feature enables him to proactively schedule maintenance and address immediate problems before video is ever lost.

“With the other systems we had, the only way you knew the system wasn’t working was when you went looking for video and discovered it wasn’t there. I’d send a tech to check it out and he’d come back and tell me that it hadn’t been recording for months. That doesn’t happen with our March Networks systems. I’ll either get alerts by email or go into the software and look myself.”

Overseeing security for Check Into Cash isn’t a nine to five job, so when a robbery occurs on a weekend or after hours, Dyer can use the free March Networks Command Mobile app to view video on his phone, or log into the system from home via a virtual private network (VPN).

Eager to take full advantage of leading-edge intelligent video technology, Check Into Cash is also trialing March Networks Searchlight for Retail software in 29 locations. The software integrates video with the point-of-sale transaction data, allowing Dyer to view exception reports of potentially suspicious transactions and immediately click through to the video. The software provides Check Into Cash with a powerful loss prevention and investigation tool, as well as the ability to integrate with analytics such as people counting and dwell time if that makes sense for the company at a future date.

Needless to say, Dyer is sold on the March Networks video solution and will continue to roll out new 8000 Series Hybrid NVRs to replace older, antiquated systems.

“I’ve had numerous vendors call me over the last three years asking us to switch to some other video surveillance system. None have had the features available that March Network has to offer. If there are seven other brands out there that have underperformed, and I have one that blows them all away, that’s the one I’m sticking with.”